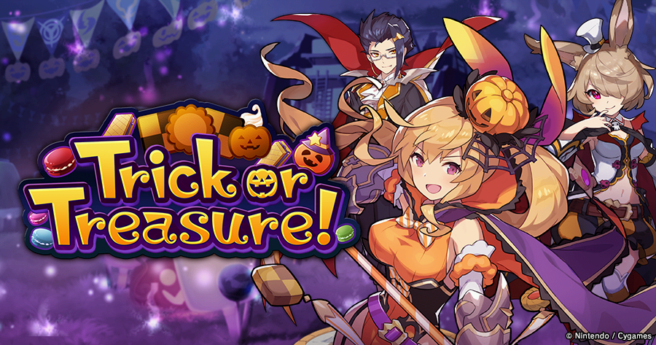 Cygames has confirmed that a new Summon Showcase called Halloween Fantasia 2 will begin tomorrow, October 18th in Dragalia Lost — along with a Facility Event Revival for Trick or Treasure!.

Both events will run until October 31st. A description for the Summon Showcase can be viewed below.

Charming Trick
Deals flame damage to enemies directly ahead,
and creates a debuff zone that lasts for 10 seconds
and reduces the defense of enemies inside it by 15%.

Tempering Fancy
Increases the strength of flame-attuned adventurers
in the team by 20% for 15 seconds, and activates
“Dream Boost” for 15 seconds. During Dream Boost,
the user’s critical rate is increased by 5%.

Critical Damage +30%
Adds 30% to the modifier applied to critical damage.

Flamewyrm’s Sweet Nature II
Reduces susceptibility to burning by 100%.
When shapeshifting, Mym will transform into
Brunhilda regardless of what dragon she is
equipped with, and her attack rate while
shapeshifted will increase by 15%.

Draconic Dream II
Increases defense while shapeshifted by 100%.
When the “Dream Boost” effect is active,
adds 20% to the modifier applied to damage
when in dragon form.

The stats shown here do not include increases or decreases due to abilities, and represent the adventurer at maximum level with all mana circles unlocked, not the stats when first obtained.
Adventurers with the same name cannot be put into the same party.
Featured Dragon:

Hocus Pocus!
Restores HP to all allies, and creates a buff zone
that lasts for 10 seconds and increases the
skill damage of adventurers inside it by 30%.

(Water) Skill Haste +35%
If the user is attuned to Water:
increases skill gauge fill rate by 35%.

The stats shown here represent the dragon at maximum level, maximum bond, and fully unbound. They do not represent the stats when first obtained.