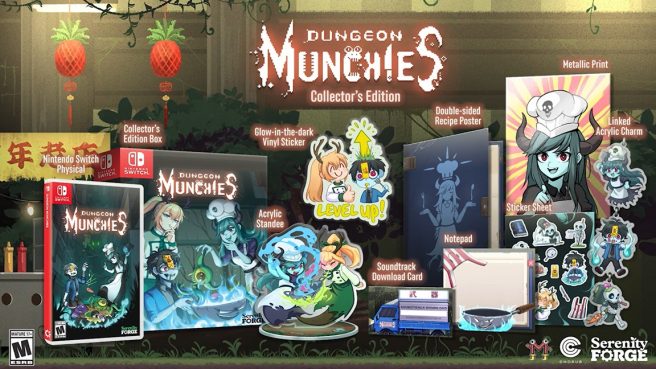 Original (7/24): A Switch physical release of Dungeon Munchines will be distributed in Japan and English support will be included, it’s been revealed. It’ll come with Japanese, German, Spanish, Simplified Chinese, and Traditional Chinese languages as well.

The game was announced for Switch in 2019, and then at the very end of 2021, dropped on Nintendo’s console. Up until now though, it’s only been available digitally.

If you’re looking for more information about Dungeon Munchies, check out the following overview:

You’ve been revived in a massive underground complex and you must leave this bizarre facility. Aided by the undead Necro-Chef Simmer, you must stay safe, get fed, find a way to get out.

Dungeon Munchies is a side-scrolling action RPG with a focus on hunting down creatures, cooking them, and eating dishes to gain certain abilities. The combination of dishes you choose to eat will impact your entire play style.

Big Menu for a Big Stomach
With a stomach that can only take seven dishes, you must put together a meal that maximises your abilities. Guava juice, grilled shrimp, or crab stirfry may mean the difference between health recovery, damage output or a watery shield.

Tools of the Trade
Craft all kinds of deadly weapons out of the animal and plant parts you can’t eat. Pair them with your favorite dishes to create the most overpowered combat combo.

Farm-fresh & Locally-sourced
In this day and age, ingredients are hard to come by. You should be prepared to face off electrical snails, razor-sharp shrimp claws, and laser wasps to get the delicious parts you need.

Something Doesn’t Feel Right…
From the self-professed-AAA-license-holding necro-chef, to the diabolical voodoo “Lord of the Forest”, to the radical revolutionaries of the fruit revolution, everyone wants you to do their thing, but no one’s really right in the head. What’s really happening down in this dungeon?

The physical version of Dungeon Munchines will launch for Switch in Japan on July 28, 2022. You can pre-order a copy here.

Update (7/26): Serenity Forge has now announced a Dungeon Munchies physical release for Switch in the west. It will come as a standard edition and collector’s edition.

The physical version will be sold in the west starting on October 28, 2022. Pre-orders will open at retailers soon.