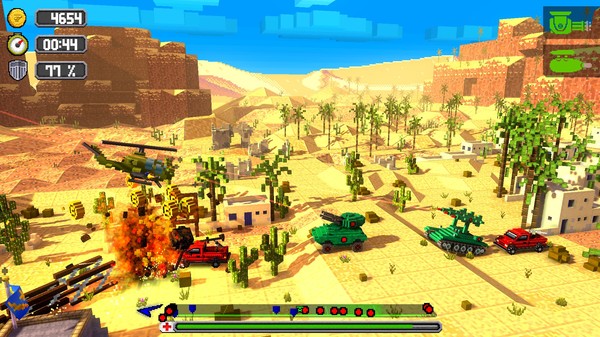 Ratalakia Games isn’t slowing down on its Switch ports. Two new games have been revealed: Dustoff Heli Rescue 2 and Pocket Pixel Horror. Both have been released on other platforms previously.

Here’s a trailer and overview for Heli Rescue 2:

In Dustoff Heli Rescue 2 you can:

Save hostages being held in Prisoner of War camps.
Combat in military attacks in the desert, forests, mines, swamps and fjords.
Build radio towers and bridges.
Protect the friendly truck and VIP convoy before the enemies can reach and demolish them!
Find and transport the stolen trucks and cargo and take them back to the HQ!
Fight against the extreme weather conditions and fly in dust storm, heavy rain and snow blizzard.
Install various gun, missile and rocket weapons to protect the friendly soldiers.

All in a well known blocky style in a family friendly mode, where humans never die, enemies always run away.

DISTRAINT was originally developed for PC and released on Steam 2015.

In DISTRAINT: Pocket Pixel Horror you step into the shoes of an ambitious young man named Price.

In order to forge a partnership from a famous company, Price seizes a property of an elderly woman.
In that very moment he finds out the price of his humanity.

This is his story and the tale of his regrets…

DISTRAINT: Pocket Pixel Horror is a horror story. It is dark and grim but also has its share of dark humor.

The story progresses quickly which allows for several settings and scenarios.
Your journey will last around two hours!

The gameplay is simple but effective: You move left and right and solve puzzles to progress through the story.

Rainy Frog will be publishing both games in Japan. Ratalakia Games will be handling the releases in the west.