Embers of Mirrim getting a physical release on Switch 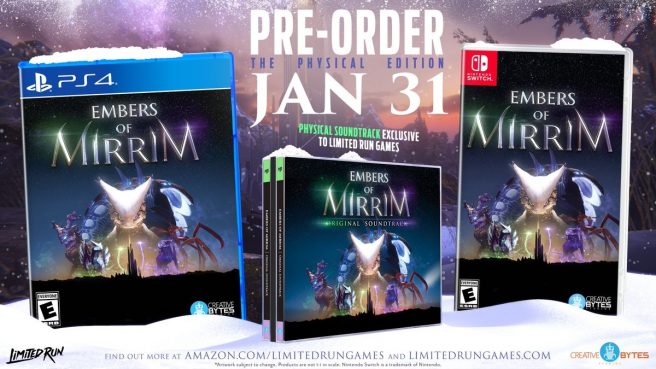 Embers of Mirrim is yet another Switch physical release incoming from Limited Run Games, which will be provided via the company’s distribution line.

The title will essentially be offered as a standalone version (no special editions). However, there will be a bundle that includes the official soundtrack.

Embers of Mirrim originally launched for Switch via the eShop at the end of 2017. Read more about it below.

An ancient power forges together two distinctly different creatures into one versatile hero charged with restoring peace and balance to the world. This newly minted savior has the grace and power of its respective races, as well as the ability to split itself into light and dark embers. The embers are controlled independently using right and left analog sticks, creating an intuitive and endlessly satisfying way to platform through stunning fantastical landscapes.

You can pre-order the physical version of Embers of Mirrim for Switch starting on January 31, 2023. It’ll be up on Limited Run Games’ website as well as the company’s Amazon store.