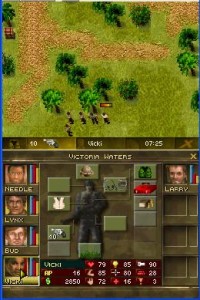 London, UK – 26 August 2008 Empire Interactive, a wholly owned subsidiary of Silverstar Holdings (NASDAQ: SSTR), has today confirmed that Jagged Alliance for the Nintendo DSTM is currently under development with Strategy First Strategy First Inc. and Cypron Studios and is due for release in 2009.

Jagged Alliance is an explosive fusion of a role playing game mixed with turn-based tactical combat, allowing gamers to become fully immersed in their characters. A new generation of gamers will be invited to liberate the Island of Metavira in the nonlinear game play that made the 1994 original so popular amongst gamers.

“Jagged Alliance provides an exciting blend of RPG and turn based action, which has already won fans and accolades worldwide. The time is right to bring its frenetic battles to Nintendo DS and allow a brand new audience the experience the exhilarating game play.” commented, James Spice, VP of Marketing for Empire Interactive.

“Jagged Alliance DS is one of the many forthcoming highlights in our new release pipeline and this announcement augments Empire’s commitment to bringing quality titles to a global market,” said Clive Kabatznik, CEO of Silverstar Holdings. “The title will prove to be a truly entertaining experience for DS gamers.”