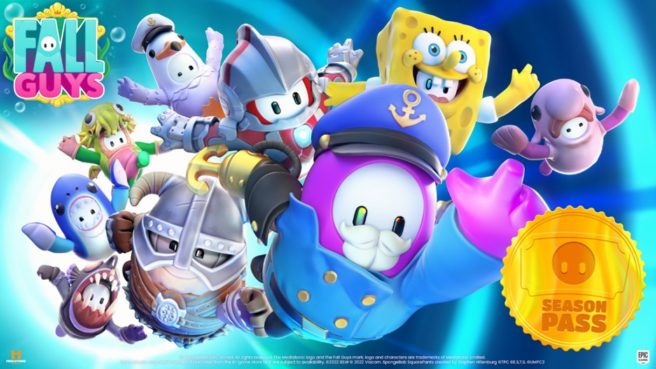 Original (11/21): Fall Guys is still trucking along, and has now announced new collaborations including SpongeBob SquarePants, The Elder Scrolls V: Skyrim, and Ultraman. They’ll be available as part of Season 3, which is known as Sunken Secrets.

The new season will “find new mysteries in an ancient underwater city” as part of the upcoming season. Read more about it below.

Five brand new Rounds: Navigate tilting pathways while dodging Blast Balls in Blastlantis, and charge down the giant flume and pass through hoops for bonus points in Hoop Chute. Then, navigate the ever-changing labyrinths of Puzzle Path and Dive Slide your way to victory in Speed Slider. And finally, test your mettle and avoid calamari calamity by dodging giant tentacles in the raft-hopping tomfoolery of Kraken Slam.

New limited-time event, ‘Let’s Get Kraken’: Along with checking out the latest obstacles and mastering the new Dive Slide move, there’ll also be a bounty of goodies to unlock.

What would a new season be without a sensational new SEA-son pass to go along with it? 100 new levels are waiting to be unlocked, plus amazing new collabs including Spongebob Squarepants, The Elder Scrolls: Skyrim and Ultraman!

More information about Fall Guys: Sunken Secrets (Season 3), including the collaborations for SpongeBob SquarePants, The Elder Scrolls V: Skyrim, and Ultraman, can be found here.

Update (12/1): We have a few new Fall Guys trailers below, including ones for Sunken Secrets and Bikini Bottom Bash.