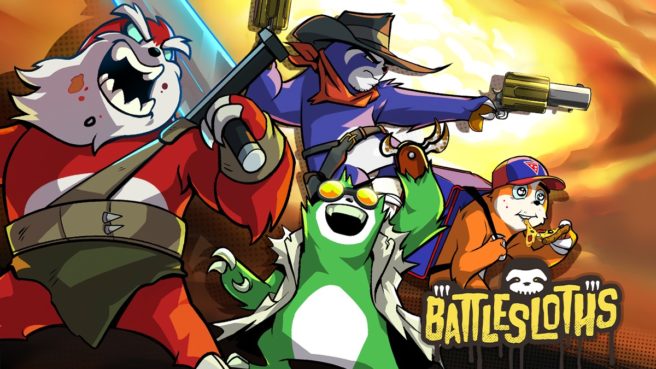 Invisible Collective is releasing its Fast-paced multiplayer competitive twin-stick shooter Battlesloths on Switch this week, the developer has announced. It will be available digitally on February 27 worldwide.

We have the following overview and trailer for Battlesloths:

No party is complete without steaming boxes of fresh pizza. But beware, your friends are hungry too, and this pizza isn’t going to last all night.

Grab a hoverboard and get moving. Defend your pizza from other players and fight for slices from across the map in this fast-paced, competitive twin-stick shooter. Choose from an arsenal over 15 weapons ranging from swords to nukes to exact death and revenge upon those who would claim any slice unspoken for. Learn to take advantage of unique map conditions to get a competitive edge over your opponents. You’ve never seen sloths move this fast (then again, you’ve never had a pizza party with a hungry sloth before.)

An award-winning indie hit now finally on Nintendo Switch, customize your sloth with over 900 hats and enjoy four different game modes allowing you to enjoy the party whether you’re alone vs. AI or with three friends.

Battlesloths will cost $9.99 on the Switch eShop.