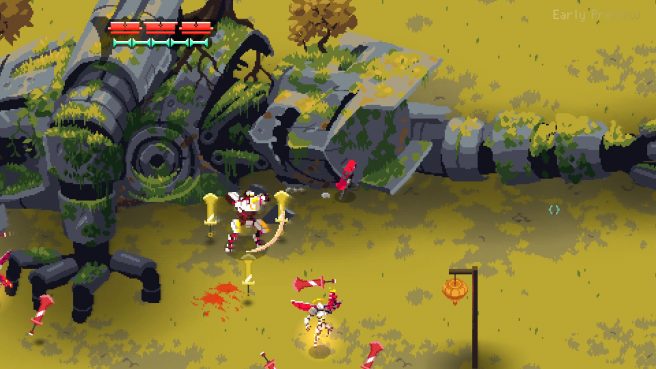 V Publishing and Matrioshka Games have announced that Fallen Angel, a fast-paced pixel action RPG, is in the works for Switch. A release is scheduled for 2021 on Nintendo’s console.

Fallen Angel is a symphony of pixel art and demon-fuelled action. Fallen Angel is a 2D top-down ARPG with strategic fast-paced combat, lore driven items and weapons, and fun character progression to suit your preferred combat style. Set in a world inspired by biblical Apocrypha and more than a little modern style, the many realms of Heaven are a strange and varied place. Lucifer won’t just be slicing his way through pearly gates and angelic choirs, but strange high-tech constructs, idyllic earth-like plains, floating islands, and more. Each Archangel will have a strong, thematic influence on the environments and creatures the player will encounter in each realm.

A BEATDOWN OF BIBLICAL PROPORTIONS
As the Fallen one, you’ll be throwing down with all the armies of Heaven across a multitude of strange realms. From crumbling ruins and lush green valleys to cyberpunk nightclubs and to far stranger places beyond. you’ll have to contend with roaming and flying angelic beasts of all shapes, with wings, tentacles, too many eyeballs, and without a rosy-cheeked harp-playing cherub in sight.

FOES IN HIGH PLACES
Each of Heaven’s realms in Fallen Angel is ruled over by a powerful Archangel, their influence shaping the world around them, repainting all of creation in their own image. Explore these strange lands and challenge their lords in intense boss battles. Each boss has their own mechanics and strategies to overcome, tactics and strategy will matter.

AN UNRELENTING ASSAULT
Survive the angelic onslaught through mastery of Fallen Angel’s stylish combat. Launch your enemies into the air, juggle their helpless bodies with a flurry of attacks. Chain claw, blade, and gun attacks into ferocious combos. Witha wide array of weaponry available, players can choose their preferred combat playstyle. As you progress you’ll be able to choose a variety of upgrades for your character allowing you to pick the upgrades that suit your playstyle or bolster your weaknesses.

A HEAVEN ALL OF OUR OWN
Fallen Angel is nothing without its fans and players. We’ve carved out our own special little circle of Hell, and invite you to join our Discord channel. Whether you’ve been cast out of Heaven or just like the sound of angelic bodies hitting the floor, come and say hello.