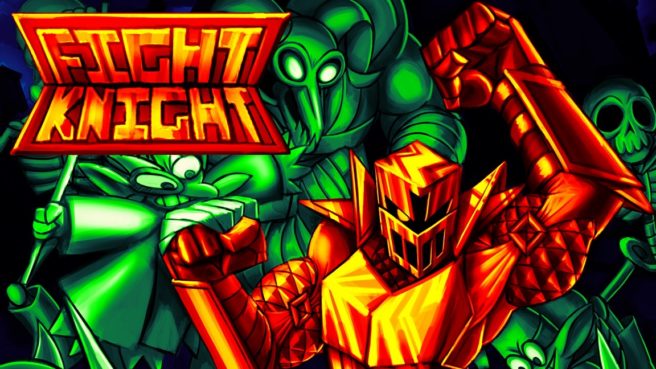 Last year, Fight Knight achieved full funding on Kickstarter. That same game is now confirmed to be coming to Switch, thanks to material found at BitSummit this weekend.

Fight Knight mixes dungeon crawling with high speed action. The game has a unique art style with all action presented from a first-person perspective.

We have more details about Fight Knight below, along with a trailer.

Fight Knight is an action packed dungeon brawler set in the ascent of the Tower, a magical teleporting spire where each floor is composed of a piece of stolen foreign lands! The player takes on the role of the eponymous Fight Knight, whose quest is to climb the ominous Tower — using only their fists!

Fight Knight is a mix between a first person dungeon crawler and a high speed action game. Players spend their time exploring a massive Tower floor by floor, learning the story of Fight Knight and getting to know friend & foe alike.

Along the way they’ll solve puzzles, collect artifacts and help Fight Knight grow in power. Encounters take place in real time, through grid based melee combat. Wits and reflexes pave the way to victory. Will YOU master the Tower and those who wait within?

A passion project that’s been a long time brewing, Fight Knight is being created by Thomas LeBlanc and Zeke James, with music by Tom “Silkersoft” Schley.

8+ Zones – each comprised of multiple floors of puzzle-filled dungeon exploration. Each zone of the Tower has its own unique setting, layout, NPCs, puzzle elements, and enemies

Choose Your Style – Equip FIGHT KNIGHT with energy-burning super moves called Specialties, consumable items, and a variety of gauntlets, all with various situational advantages and attributes. give Fight Knight what you think gives an edge!

Challenging Foes – Enemies work together to ensure your demise. Enemy types all have their own particular quirks and attack patterns. Not only does Fight Knight need to learn how to approach fighting them individually, but in large groups too!