Posted on August 4, 2020 by Brian(@NE_Brian) in News, Screenshots, Switch eShop 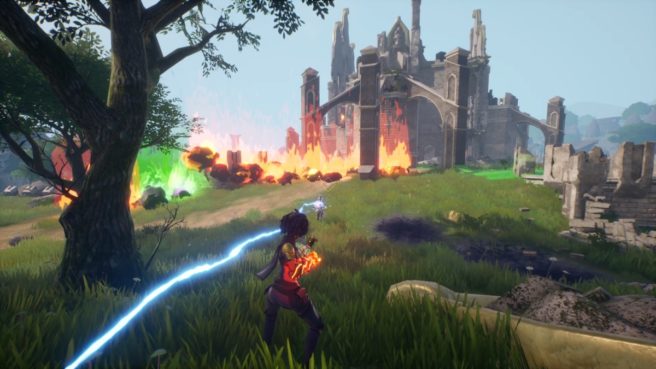 Proletariat has opened up about the Switch version of Spellbreak, the upcoming fantasy action battle royale game.

CEO Seth Sivak mentioned to Nintendo World Report that most of the work is being handled internally, though the team is receiving assistance from “several outstanding external companies on different parts of the game”. Although the texture quality and material quality have been “slightly scaled back” and the models are “slightly lower details”, a primary goal has been to preserve “great performance while also making the game as beautiful as possible.”

“Most of the development for Spellbreak is being done internally but we are working with several outstanding external companies on different parts of the game to ensure everything is done – and done well – by our deadlines… For the Switch, the biggest challenge is ensuring great performance while also making the game as beautiful as possible… It was important to us to preserve the draw distance and a stable frame rate for quality competitive play. For the visual side, we wanted to ensure the flashy VFX and stylized toon shading were kept to the highest quality possible to embody the full look of the game. As a compromise, the texture quality and material quality are slightly scaled back compared to other platforms and the models are slightly lower detail.”

Spellbreak will run at 30 frames per second on Switch. It’ll be 900p (upscaled to 1080) when docked, while the portable resolution is native 720p.

Sivak mentioned that the team made Nintendo’s console “a priority for launch because we have a goal to make it as easy as possible for Spellbreak players to play with their friends, and with cross-play we open up a huge audience on the Switch.”

As far as the future goes, many updates are planned, including gyro aiming after launch.

“We will not have gyro aiming at launch, but it will come in a near-term future update. We plan to constantly improve the game through frequent updates that will add additional platform specific features and build out the experience for every platform. We have a lot of plans for the game post-release, but we can’t quite divulge what those are yet. We post a lot of what we have planned on our official blog… We also spend time with our community in the Spellbreak Discord talking about what we have coming up for players.”

Spellbreak launches on Switch later in 2020.