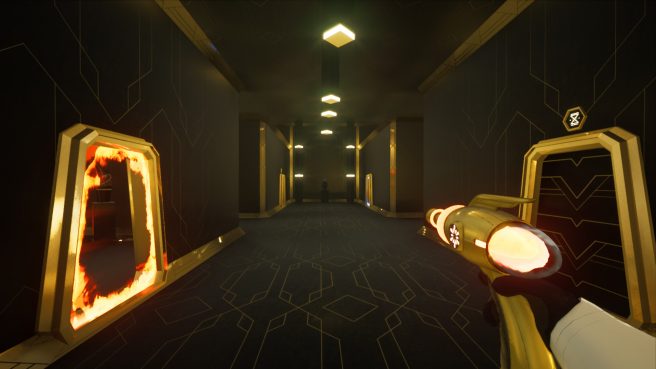 Here’s an overview and trailer straight from Deck13:

In Faraday Protocol, you take the role of the interstellar Archaeologist Raug Zeekon on his quest to explore the mysterious space station OPIS. What happened to this place and what is the role of the enigmatic A.I. IRIS?

To solve the puzzles of OPIS you use the so-called Bia-Tool. This alien utility allows Raug to absorb certain forms of energy and redistribute them, activating and manipulating the machinery on the space station.

You can activate and deactivate power lines and devices with orange energy—or bridge and re-route them using the blue energy.

You’ll have to solve many interesting and challenging puzzles, inside and outside OPIS’ Ziqqurats, to progress and solve its many mysteries!

– Puzzle your way through the mysterious space station OPIS.
– Experience a unique blend of Sci-Fi and Art deco.
– Use the Bia-Tool to absorb and redistribute energy.
– Unravel the many mysteries of the station and its governing A.I. “IRIS.”
– Find hidden collectibles that reward especially attentive players.

Faraday Protocol will be sold digitally for Switch via the eShop.