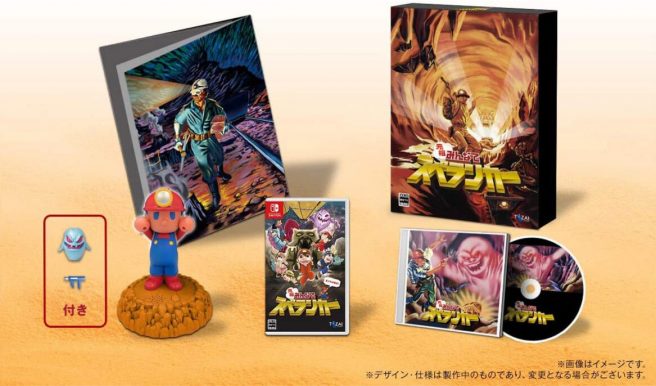 According to retail listings, Tozai Games will be bringing Ganso Minna de Spelunker to Switch. The game launches on July 15 in Japan.

The main game will cost 3,300 yen. For 7,480 yen, fans can pick up a limited edition. It includes the soft vinyl figure (with sound), original soundtrack CD, and cave exploration guidebook with maps of every stage.

Ganso Minna de Spelunker is an action game in which the cave explorer Spelunker, said to be “the weakest chracter in video game history,” explores caves full of mystery. With 100 stages consisting of abandoned mines, underground lakes, ancient ruins, glaciers, and more, Spelunker’s goal is to reach the depths of each cave.

Caves are full of dangers including natural terrain, cave creatures, and malicious traps—and enemies and traps that appear to be traces of an unknown civilization will appear in the latter half of the cavern. Spelunker must overcome these obstacles by properly utilizing items such as bombs, flares, portable fans, and more, as well as his jump technique.

But be cautious, as Spelunker is quite weak! If you fall from your own height, or get hit by bat poop, you will die. Spelunker’s weakness, or his “fragile constitution,” gives the game a moderate sense of tension and rhythm, making it more interesting as an action game.