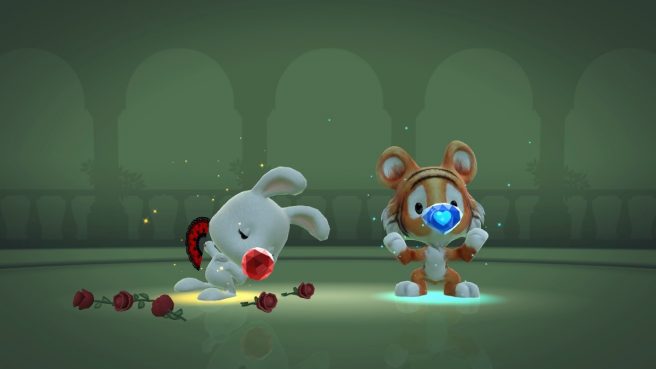 Geminose: Animal Popstars was announced for Switch back in 2017. At the time, Starbreeze Studios was involved. That’s no longer the case, as Ultimas and Midnight City are now working together with Silver Bullet Studios on the project.

Here’s a bunch of information about Geminose: Animal Popstars:

Geminose brings a seriously cute cast of animal characters for players to unlock, with each having a unique personality and country of origin. Players will have a wide array of quirky characters to choose from such as Topaz Tiger, a master sitar playing; Bhangra a dancing tiger hailing from India; Diamond Dog, a British violin virtuoso sleuth; and Umbalite Unicorn, a disco dancing lyre player from the Land of Myth and Legend. Players can also kick off dance-offs between the Geminose, to add a lineup of 45 mashup superfans to their group.

Players will travel the globe to find ‘best-in-class’ musicians to join the band. Once their band is assembled, it’ll be time to hit the road and build their fanbase for global recognition. Becoming a global hit will also net players rewards to customize their house and band looks, as well as unlock several mini-games. Geminose features over a hundred outfit combinations ranging from zany styles to fashionable ensembles. Players can tap into their inner chef in the shared kitchen, creating recipes from all over the globe.

Featuring eight rooms including character-themed options, and hundreds of unlockable unique interactive items, players in Geminose will be able to decorate the mansion of their dreams. With aesthetics ranging from the bustling streets of NYC to the lush forests of Uganda, players will be able to decorate every room in their mansion to suit their style or their musicians’.

– Collect 10 animal musicians from around the world and form your own hit band.
– Over 30 musical instruments to master.
– 20 original songs with hundreds of ways to rearrange them.
– Attract 45 ultra-cute mashup super fans via Geminose dance-offs.
– Play through story mode with Nimmy and Smudge managing your chosen band, or choose free play mode for endless hours of fun.
– Build and customize your mansion with hundreds of decorative items to choose from and interact with, in any room.
– Take your band on a world tour to unlock additional songs, outfits, and decor to deck out your mansion.
– Unlock the mansion kitchen and cook recipes from around the world.
– Play a variety of mini-games when on a break from your tour.
– Challenge your friends in local 2-player mode.

Geminose: Animal Popstars is slated for early 2021 on Switch. You can find our original post here with an older trailer.