Genesis Noir getting a physical release on Switch 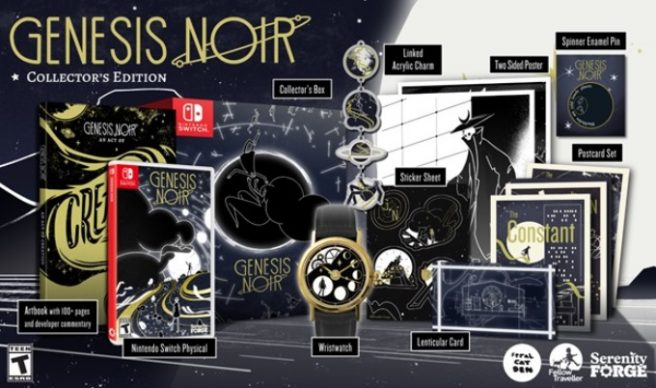 Serenity Forge, Fellow Traveller, and Feral Cat Den have announced a partnership for a physical release of Genesis Noir on Switch.

A standard version and collector’s edition are planned. With the standard release, priced at $39.99, you’ll get a physical copy of the game, illustrated inner coversheet, 3D lenticular card, Yoshitoshi-inspired illustrations on a two-sided poster, and high-quality vinyl sticker sheet. The $119.99 collector’s edition has everything in the standard version plus a collector’s box, detailed 134 page art book featuring developer commentary, set of four postcards depicting iconic scenes from Genesis Noir, distinctive space linked keychain with characters from the game, dynamic spinner clock enamel pin, and a high-quality wristwatch with face art inspired by the game.

Genesis Noir, a point-and-click adventure currently available on PC via Steam, Nintendo Switch and Xbox consoles, sets players in the shoes of No Man, an eternal watch peddler stuck in a love triangle with two other cosmic beings: Miss Mass and Golden Boy. When an ensuing gunshot sets off the Big Bang, players will have to destroy the universe to save their love.

The physical release of Genesis Noir for Switch is due out in Q1 2023.