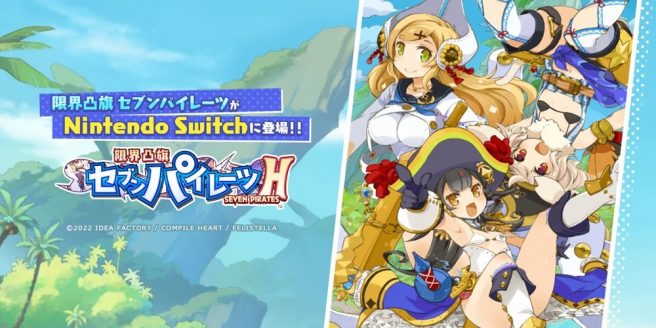 The game, developed by Felistella, originally launched for the PS Vita in 2016. It has never seen an English localization.

Here’s some information about the RPG, courtesy of Play-Asia:

Collaborating with developer Felistella, the team behind the inner RPG workings of Compile Heart’s flagship RPG Neptunia, Genkai Tokki Seven Pirates aims to approach audiences who enjoy the traditional experience of one of Japan’s favorite gaming genres, as well as those who enjoy Japan’s other favorite genre, fanservice.

Speaking of the latter, of which Compile Heart is now notorious for, Seven Pirates will not feature any male characters, and opts to focus on the adventures of seven pirates on the seas infested with harems of monster girls. Even the main girls themselves are monster inspired from the likes of krakens, skeletons, and even slimes.

As such, stats and gameplay will revolve around a chest growth mechanic, and while this this has been done by other similar titles like Omega Labyrinth by D3 Publisher, Genkai Tokki Seven Seas makes a drastic change, catering to the ever growing pattenko community.

Genkai Tokki: Seven Pirates H will be hitting Switch exclusively through the eShop on February 3. Access the official site here.