Gensou SkyDrift due out for Switch on December 12 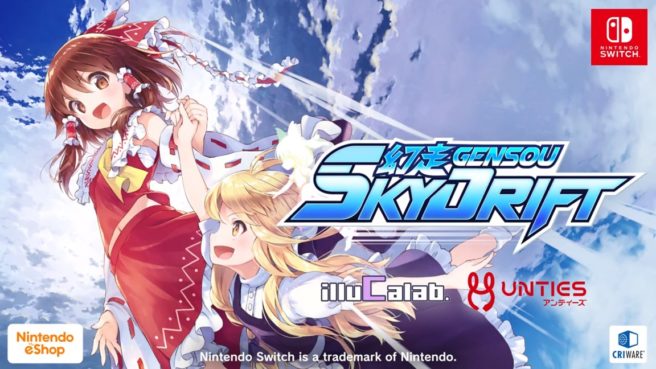 Publisher Unties and developer illuCalab today announced that the tag-team racer Gensou SkyDrift is coming to Switch on December 12. It will be sold as an eShop download.

Here’s an overview of Gensou SkyDrift, along with a trailer:

Race through the beautiful and magical land of Gensokyo at break-neck speeds in a kart racer where your partner is your vehicle. Choose two racers from a roster of 20 magic-infused characters, each with their own driver handling stats and set of power ups, and swap between them on the fly. One racer steers the other, and swapping positions enables dynamic mid-match strategy changes.

Speed through more than 15 breathtaking stages to pulse-pounding music. Navigate through hoops scattered across the tracks to gain temporary boosts and charge racers’ mana. Unleash havoc on opposing teams by drawing devastating spells from character-specific decks of offensive and defensive abilities.

Test your skills in Story, Versus, and Time Attack modes or compete against up to seven friends in online multiplayer matches. GENSOU SkyDrift’s pool of characters are pulled from the beloved and long-running Touhou Project in a fan-made entry allowing old hands and newcomers alike to see the girls like never before—flying on one another’s backs.

Gensou SkyDrift will cost $23.99 / €21.99 on the Switch eShop, and a 20 percent launch discount is planned. Pre-orders open December 5. English, Japanese, and Chinese (Simplified and Traditional) languages will be supported.