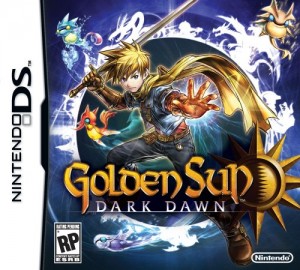 There’s certainly no shortage of RPGs on the Nintendo DS, with Nintendo publishing Pokemon HeartGold and SoulSilver, Dragon Quest IX, and Glory of Heracles all over the last twelve months. Joining these titles on the crowded handheld is Camelot’s Golden Sun: Dark Dawn, the latest game in a series that has been off the radar since it last appeared on the Game Boy Advance. Fans have been begging Camelot for a new Golden Sun game for ages, so does Dark Dawn live up to expectations and, more importantly, does the series still hold up after a seven-year hiatus? 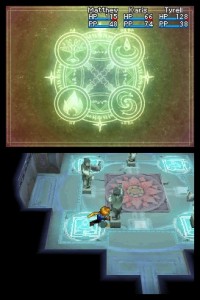 I’ll let the statue-pushing “puzzles” answer that for you.

Golden Sun: Dark Dawn kicks off thirty years after the events of the first two games. After bringing elemental power back to the flat world of Weyard, most of the original protagonists have settled down and had kids, all of whom can manipulate the magical power of “psynergy.” Led by the original protagonist Isaac’s son, Matthew (who seems to have inherited both his father’s earth adept powers and his mute hero syndrome), this new generation of heroes sets out on their own journey full of ancient technology, psychic powers and plenty of fetch quests. The setting of Weyard is pretty interesting, especially considering the changes that have occurred there since Golden Sun – The Lost Age: continents have been shifted around, new nations have emerged, and the release of alchemy has created a cool race of beastmen – one of which joins the party later in the game. While Dark Dawn’s location is neat, the actual story and characters are weak. The plot starts off excruciatingly slow, with barely any character development and villains whose goals seem to be providing a minor inconvenience to the hero. The pacing picks up near the end, but there are still elements of the story that are dropped altogether. What’s with all the psynergy-sucking vortexes scattered around Weyard? Who is the water adept, Amiti’s, actual mother? Looks like fans will have to wait for the next game in the series to explain it all, though it might not take another seven years given that Dark Dawn isn’t subtle about setting the series up for another sequel.

It’s not just that the plot is weak; it’s also poorly told. I can understand the need for the events of the previous two games to be explained, but having characters talk endlessly about them comes off as dull and unnecessary, especially considering that there’s a handy encyclopaedia that lists everything you could ever need to know about Weyard, as well as a bunch of picture books that show exactly what happened in Golden Sun and The Lost Age through adorable cutscenes. 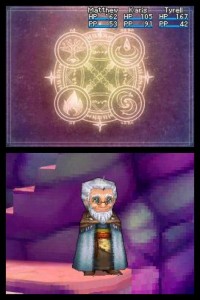 The Golden Sun incident caused everyone directly involved to age slower, which is a handy way of explaining why Kraden is still alive.

As I mentioned earlier, Golden Sun: Dark Dawn is practically overflowing with fetch quests, with almost every new location requiring Matthew and friends to trek back and forth across the World Map collecting inventory-cluttering objects. For example, the game begins with Isaac and Garet tasking the new protagonists with repairing a hang glider-esque vehicle used by wind adepts known as a “soarwing”. To repair it, they have to pluck a feather from the legendary Mountain Roc, a giant bird that can only be reached by passing through an ancient temple. To get through the temple, the adepts need to first complete a training course, but then a cave-in forces them to find another way to get to the Mountain Roc – by creating a passage made of clouds allowing them to reach the next continent. The passage can only be made by starting up an “alchemy forge” that requires a special mask to run. Naturally, the mask is at the bottom of a labyrinth that can only be reached by using special psynergy from a city across the other side of the World Map that also needs an alchemy forge to be started up. By the time both forges are running I’ve already spoiled the first third of Golden Sun: Dark Dawn. Granted, the new heroes never get as sidetracked as the characters in the first Golden Sun, and every fetch quest does serve a purpose, but it’s still aggravating, especially when (spoilers!) the soarwing isn’t repaired until the end of the game.