From the get go, the visuals in Chinatown Wars are arguably the best on the handheld to date. The opening cinematic is a flurry of graphically impressive – and realistic- buildings, cars and objects, all rendered in full 3D and interacting with more realism. In addition, objects are not glued to the ground like they may be in a standard 2 dimensional video game. Everything is delivered in 3D with the exception of the character models, which are cleverly created with cell shading and a half 2D art style that not only make the player believe that the citizens of Liberty City are three dimensional, but also adds a level of surrealism to the game, which serves it well throughout the experience.

Visuals aside, Chinatown Wars is unquestionably one of the most flawlessly designed games. The controls are tight, precise, and made to be easily accessible both for driving and walking. Weapons control features a very useful auto-lock, which helps with both aim and for repositioning yourself in relation to your surroundings. Driving is as easy as walking and is a vast improvement over recent Grand Theft Auto games, allowing you to easily maneuver through traffic and intersections without so much as killing one or two pedestrians. What’s more, touch screen implementation is neither overused nor underused, and is generally limited to smaller tasks like hotwiring a car, navigating menus and assembling a sniper rifle. Because of the frequency of these touch-based activities, you never feel overwhelmed by them, nor will you desire more while you play. 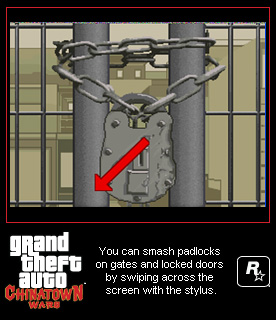 One qualm that many GTA fans were skeptical about when it came to Chinatown Wars is the new camera angle that was slightly reminiscent of the original Grand Theft Auto. It was thought that the overhead view would detract from gameplay by shortening your view distance and causing activities such as driving and shooting to be more difficult. Contrary to this uncertainty, everything that longtime fans of the series had feared would come with the new camera was overturned and consequently became what should be the new standard for overhead gaming. Though it is true that the view length is considerably shorter in Chinatown Wars than it is in GTA IV, Rockstar Leeds considered that setback and built the game around it and have added the use of auto-locking and a conveniently placed mini-map to make shooting and driving a breeze. Moreover, the camera is not directly overhead like Pokemon or the original Grand Theft Auto. It is tilted at an angle (much like Phantom Hourglass) and is fully able to tilt, pan and zoom to make playing the game smoother and more enjoyable.

Chinatown Wars also features a fairly engrossing storyline, which frankly surprised me. Though through summary it would appear nothing more than your classic, well-paced Grand Theft Auto story, complete with gangs, guns and girls, the dialogue and execution add a humorous and very welcome level of sarcasm and criticism towards gang life. The “protagonist”, Huang Lee, is a sarcastic smart-ass of a character, and is always making fun of the various gang bosses and detectives that he works for through blatant sarcasm and insults. As if that was not enough to communicate the satisfying criticisms that previous games lacked, the bosses to whom he is speaking take those sarcastic insults as if he were being serious, further displaying the blind ambition of greed in these particular gangs.

The game starts off fast, propelling your character into the world of gang violence faster than the cars you steal in the game. The very first mission consists of you getting ambushed, shot and dumped in a river with the car you were riding in, forcing you to break the windshield glass to escape the car. After that, you meet various gang bosses who hire you for their work, often forcing you to attack or steal from other bosses you may be working for. The tasks you complete for your bosses are extensive, and can range form assassination, to grand theft auto, to burning supplies; and all are laid out at very fitting intervals. As soon as you become bored of the free-roaming aspect, you can bet there will be missions waiting for you, and when missions no longer seem worthwhile, there are a staggering amount of side-quests and other doings accomplish. 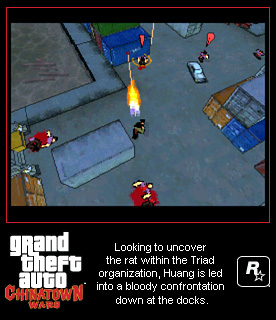 The most prominent side-feature of the game is the drug-dealing minigame in which you buy drugs from certain dealers and re-sell them to others for a profit. In addition, you receive email notifications when certain dealers are offering a deal. The limitation to this is that you can make money and only money off of such activities, and though this allows you to purchase many more items (cars, weapons, more drugs), it is somewhat limited in terms of actual playability.

However, what aren’t limited in playability are the random side-quests scattered throughout the city. These tasks can be accessed by talking to particular people on the street. Such side-quests include driving people to specific places for cash, stealing certain cars for people for cash, and killing certain people for cash. As is obvious, many of the minigames are cash-centric and are, as such, restricted. Some very welcome additions to the side-quest category are the various missions you can partake in through the theft of government vehicles. For example, if you steal a police car you can access the computer and respond to various distress calls from citizens. Of course, being a GTA game, the only way to deal with such criminals is to kill them in cold blood. Or warm blood. What’s the difference in Liberty City? Other such side-quests include stealing a taxi and taking people to their destinations, stealing a fire truck and putting out fires, and stealing an ambulance to save dying people. In addition to all of this, GTA fans can rejoice at the fact that free-roaming is just as fun as it has been in past years. From the insane car jumps to the rampaging shoot-outs, everything that has been present in previous installments is here in this one; it’s just presented in a slightly different style.

Even with all of the positives that Chinatown Wars contains, there are bound to be issues, and Chinatown Wars has its fair share. During situations when there is a mix of explosions, high speed chases and tons of cops, the game will often slow down for a bit, and even froze on me once. Though this is minimal and limited to time when there are many things going on at once, it is something that the game could have done without. Regardless, taking into account the sheer enormity of the game for the system, it is a very unimpressive negativity.

With everything Chinatown Wars has to offer in single player it should not even need any sort of multiplayer to constitute a purchase, but even so, Rockstar came through in that department as well. The game features two multiplayer modes; Wireless mutli-card and Wifi play. Multi-card play is the more impressive of the two, featuring several game modes for you and one other person to compete in including various racing, shooting and defending games that add a completely new level of replayability to the game. In dealing with Wi-Fi, however, gameplay is very limited and consists only of live-chat via instant messenger with friends, sharing favorite locations, and item trading. 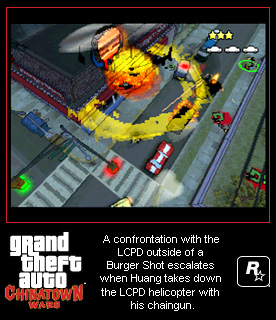 Amid the various fresh and original aspects to Chinatown Wars, aficionados of the Grand Theft Auto series should not look to be disappointed. The game (though on a typically “younger” system) deserves the ‘M’ rating it received, and has no shortage of the blood and swearing that hardcore GTA fans have come to love. Also, side-street conversations are back in Chinatown Wars, something that the last Nintendo GTA lacked. From “Are you high on meth!?” when you attack a pedestrian to “Hey man, I’m walkin’ here!” When somebody bumps into you on the street, all of it is present and in the highest sound quality that I’ve heard on the DS. Additionally, as you’re walking around Liberty City, cars honk and screech, people talk, sirens blare, and a general out-door hum is present wherever you go, causing a truly realistic feel to the entire game, much like GTA IV.

When it was announced, Chinatown Wars was met with mixed reactions. Some people jumped out of their seats with joy, some people turned their heads from Rockstar, convinced that this would go the way of the GBA iteration of the series. Regardless of which side you fell on, it was most certain that nobody expected a DS version of the game to redefine the Grand Theft Auto series entirely, especially considering the hardware limitations of the system. Despite all of that however, Grand Theft Auto Chinatown Wars proves to be not only a must-own DS title, but also the premiere Grand Theft Auto game to possess.

This game is for people who:
– Own a DS
– Consider themselves a mature gamer

This game is not for people who:
– Dislike violence and vulgarity in video games
– Consider themselves a casual gamer