Posted on February 25, 2015 by Austin(@NE_Austin) in Features, Podcast 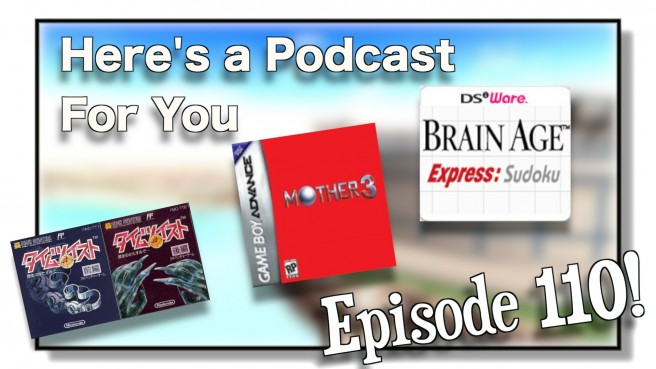 Welcome to episode 106 I mean episode 110. How are you? I’m okay. I hope you’re okay too. Here’s an overview of what we’ll be talking about on this episode:

Segment 1, Intro: The game for this week’s Game of the Week is a very, very weird and probably-considered-offensive Famicom Disk System title called Time Twist! It never came out in the west though so I guess everything is okay.

Segment 2, What We Played: Austin has finally beaten MOTHER 3, and he has so much to say about it! Unfortunately he doesn’t want to spoil anything, so it ends up just being a lot of interesting and vague praise. Laura is continuing through Majora’s Mask 3D, but she’s trying to slow it down this week. Finally, Jack somehow ended up with Brain Age Express: Sudoku, which he says is a bit of a stink.

Segment 3, Book Club: The book club this week comes with a new focus: The bosses of A Link to the Past, what we can learn from them, and how they relate to bosses in more recent Zelda games. We end up talking a lot about Zelda bosses in general and what we like and dislike about them.

Segment 4, Listener Mail: Listener mail ended up being all Zelda topics this week! We address some concerns people have about Majora’s Mask 3D’s “improvements”, how Zelda Wii U could take some cues from the Oracle games to improve its overworld, and more!