How to redeem Mewtwo in the new DLC Shop for Super Smash Bros. 3DS 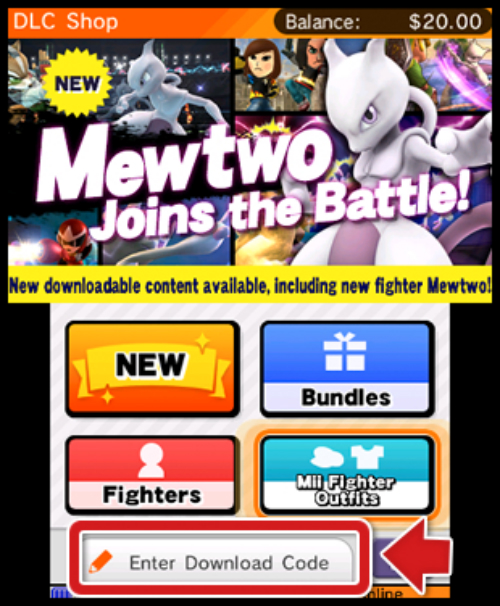 Super Smash Bros. first DLC for the much anticipated Mewtwo is right around the corner, and with that comes a new patch and update to both the Wii U and 3DS versions, with the 3DS version getting a significant change.

Once you receive your Mewtwo DLC codes, redeeming it on Wii U is pretty straightforward. Just like any other redemption code, simply head on over to the eShop and input the code to access your Mewtwo download. On 3DS however, there’s a new DLC shop being added that you can access directly from the game itself.

Nintendo just released some screenshots on a new page giving players a step by step walkthrough on how to go about downloading Mewtwo in the new DLC shop. It’s pretty simple; once you get into your game after you’ve downloaded the new update, hit Y to access the ‘Notices & DLC Shop’ menu, hit Y once more to go directly into the eShop, hit ‘Enter Download Code’, input your code and you’re done!

How excited are you to see Mewtwo strike back after going on hiatus after Melee? Let the Mewtwo vs Lucario battles begin!