Huntdown launches for Switch on May 12, new trailer 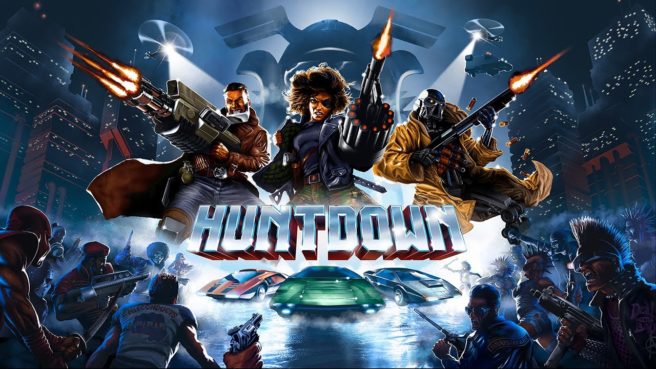 Huntdown was first announced for Switch back in 2017. Three years later, the action-platformer now has a release date.

Huntdown will be available for Switch on May 12. Publisher Coffee Stain and developer Easy Trigger Games will be distributing the title as an eShop download.

Here’s an overview of Huntdown, along with a trailer:

CRIME DOESN’T PAY… UNLESS YOU’RE A BOUNTY HUNTER
In the mayhem-filled streets of the future where criminal gangs rule and cops fear to tread, only the bounty hunters can free the city from the corrupt fist of felony. Lay waste to the criminal underworld and make a killing in this hard boiled action comedy arcade shooter.

TWO PLAYER LOCAL CO-OP
Hunt solo or give suppressive fire and advance on the enemy together as you run, jump, and take cover in the mayhem-filled streets of the future

THREE LEGENDARY BOUNTY HUNTERS TO PLAY AS
Anna Conda: Ex-commando and firearms expert. A loose-cannon trained to assassinate without question or mercy.
John Sawyer: Special forces cop who left the law behind. This scarred veteran has lost so many limbs in combat he’s half robot.

20 LEVELS
Gritty, neon soaked, graffiti strewn 80s cityscapes to cleanse, each with their own infamous gang boss to terminate and bounty to collect.

Misconducts: Organised hockey hooligans, experts in robbery and extortion with a penchant for explosives
The Heatseekers: Murderous motorcycle club. These rockabilly villains style themselves on the centurions of Ancient Rome

NO.1 Suspects: Masters of discipline and organised crime. Martial arts experts, these slick psychopaths control the night through their casinos and nightclubs

CHOOSE YOUR WEAPON
Confiscate machine guns, laser weapons, katanas, grenades and more, and turn them on their owners. Stab, shoot and explode your way through swathes of gangs and bosses and collect your bounty.