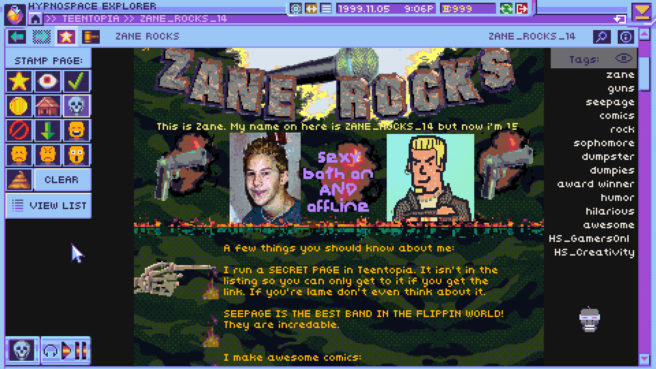 It’s been announced that Hypnospace Outlaw is making its way to Switch next week. A release is planned for August 27 via the eShop.

We have the following overview and trailer for Hypnospace Outlaw:

Greetings Enforcer, and thank you for enlisting in the Hypnospace Patrol Department! As the corporatocracy sleeps, outlaws are out there committing terrible transgressions all across our beloved Hypnospace, and these virtual streets aren’t going to police themselves!

Hypnospace Outlaw is a ’90s internet simulator in which you scour Hypnospace’s wide variety of weird and wonderful websites to hunt down wrongdoers, while also keeping an eye on your inbox, avoiding viruses and adware, and downloading a plethora of apps that may or may not be useful.

As part of your job as a Hypnospace Enforcer, you’ll be watching out for copyright infringement, internet bullying and more, with reports and rewards coming direct from the Hypnospace Patrol Department to your inbox. In your spare time, you can customize your HypnOS desktop however you see fit, with a variety of downloads, wallpapers, screen savers and helper bots to keep you company.

So slip on your Hypnospace Headband™, and keep these key directives in mind:

Crawl through Cyberspace: Scour the darkest corners of the Web for scumbag users who violate Hypnospace law!
Dangers and delights: Download groovy GIFS and MIDI files, but watch out for adware, toolbars and hackers!
Treasure hunting: Do your job to earn Hypnocoins, or ignore your inbox and go hunting for hidden pages, downloads and secrets!
Relive your childhood: Equip obnoxious screensavers and skins for your desktop, and wiggle your mouse pointer around to make pages load faster!

Hypnospace Outlaw has a demo now on the Switch eShop.