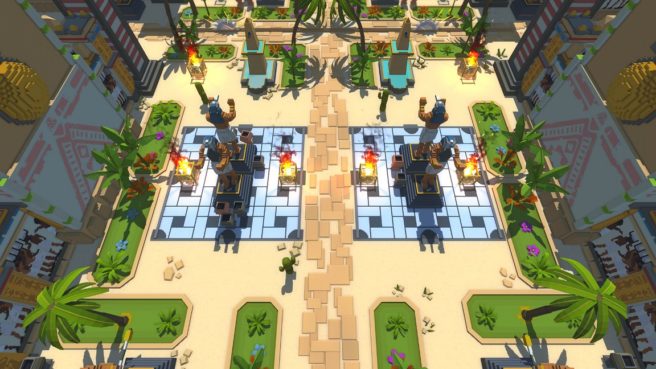 Developer I Hate Running Backwards has confirmed that Binx Interactive is in the works for Switch. It’s a top-down shooter with procedurally generated levels. Co-op multiplayer is also supported.

I Hate Running Backwards is currently without a release window, but it’s planned for the eShop. We have more information and some footage below.

Sam and friends get stuck in mixed space time continuum and fight across different time periods, all in one single crazy run! How far can they go?
Test your skills in this fast paced, procedurally generated endless shoot’em down destruction mayhem!

– Swing like you mean it! – Deflect rockets, bullets, bombs and cannon balls by swinging your mighty hammer! Destroy enemies with it! Destroy the environment with it! The more you swing, the more fun it gets!
– Why run, when you can walk? – Drive cars, boats, choppers, ride mine carts! High speed destruction FTW!
– Do you feel special, punk? – Break Special Weapon crates to get one of more than 40 Special Weapons in the game, ranging from the Shrapnel Umbrella to the allmighty Peacekeeper!
– Are you Serious? – Play as Sam “Serious” Stone, or other action game heroes in an endless mega-epic battle to destroy as many aliens and monsters as possible. If you’re going down, how many can you take with you?
– Shoot ‘em down! – Take on the shoot ‘em up genre upside down with Sam doing what he hates the most – running backwards!
– Monsters! Monsters everywhere! – Fight against horde after horde of enemies! Endless waves of monsters are coming straight for you! How long can you survive?
– More powah! – Collect power ups that give you additional edge in combat!
– Bosses and perks – Battle huge bosses and get perks after every victory ranging from faster movement, bigger health to bigger melee range and more ammo.
– Who’s with me? – Fight side by side with a friend in the couch co-op multiplayer mode for 2 players. Remember to leave some ammo for her/him.
– Who else is with me? – Unlock various and unique characters that bring their own special abilities to the battlefield.
– Destructible environment – Watch as you and your foes destroy everything in your path while battling each other.
– Guns blazin’ – Dual wield your weapons to glory! Combine Main and Special weapons and turn yourself into the ultimate death machine!