I Hate Running Backwards due out on Switch this month 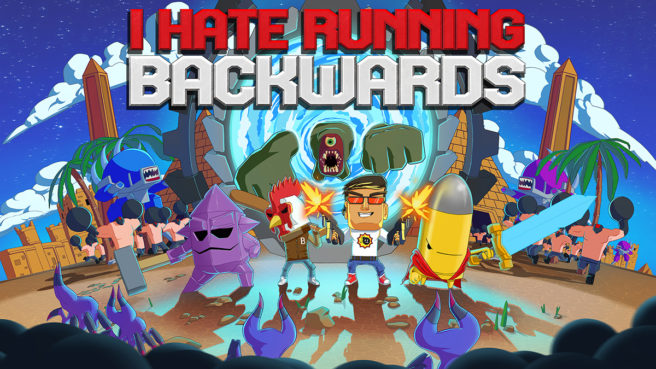 I Hate Running Backwards initially released a few months ago. The Switch version is now complete, and will arrive this month. The North American and European eShops both show a release date of October 19.

Here’s an overview and trailer for I Hate Running Backwards:

I Hate Running Backwards is a never-ending adrenaline packed shoot’em down roguelite that puts the emphasis on destruction and fighting never ending waves of enemies while time traveling through procedurally generated, fully destructible worlds! Pick your character and blast away enemies with a high powered arsenal of shotguns, lasers, rocket launchers, singularity cannons and other weapons!

Sam and friends get stuck in a mixed space-time continuum and have to battle the giant Ugh-Zan, this time reincarnated as a giant mech, and his armada of deadly monsters. The battle will take them across different time periods and environments – from Aztec jungles to the deserts of Egypt with a deadly boss awaiting at the end of each environment.

Intense never-ending action will have you destroying wave after wave of enemies on your way to the final boss. You think you’re done when you do? Think again! The game loops and sends even tougher enemies at you.

Choose from a roster of characters that bring their unique arsenal to the battlefield like Serious Sam, The Bullet (Enter the Gungeon), Lo Wang (Shadow Warrior), Rambro (Broforce), Richard (Hotline Miami) and more!

Use your mighty melee weapons to lay waste to enemies and destroy the environment!

Fight your way to the top of the leaderboards in standard and daily modes.

Fight side by side with a friend in the couch co-op multiplayer mode and remember to leave some ammo for your buddy.

Watch as you and your foes destroy everything in your path while battling each other in destructible environments!

I Hate Running Backwards will cost $14.99 on Switch.