Ikenfell getting a physical release 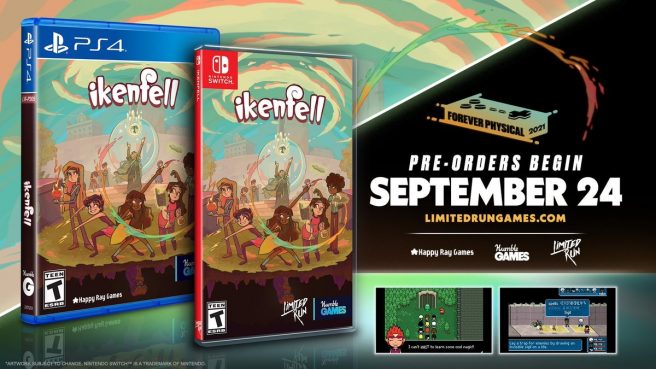 Ikenfell is getting the physical treatment from Limited Run Games, the company has announced. It looks like this will be a standard release, so there won’t be any special editions.

Ikenfell is a turn-based tactical RPG from publisher Humble Games and developer Happy Ray Games. It first made it to Switch last October as a digital download. This is the first time it will be made available physically.

A turn based-tactical RPG about a group of troublesome magic students. Use timing mechanics to power your spells and block attacks, explore the twisted halls of a vast magic school, fight challenging monsters and bosses, find tons of hidden treasure, and uncover dark secrets never meant to be found.

– A heartwarming and twist-filled story about friendship, trust, love and loss
– 3 students in battle, from a total of 6, each with unique powers and strengths
– 48 unique spells: blast your enemies, knock them back, poison them, or heal and buff your allies. There is no “MP”… spells are about skill and strategy! Each with its own timing to master
– 100+ enemies to battle: spirits, myths, monsters… even students and teachers! Learn their tricks and traps, and master the timing of their attacks to overcome them
– 22 challenging bosses who will push your strategy and timing to the limit
– 100+ items to discover: wands, hats, cloaks, rings, and magical artifacts. Secret treasure is hidden everywhere, and every item you find helps you fight against the powers threatening you.
– Explore a vast school of magic: the dorms, alchemy labs, astronomy tower, twilight yard, and a dozen more mysterious and magical locations
– Beautiful soundtrack from the composers behind Steven Universe
– Cats. Everywhere.

The physical version of Ikenfell can be pre-ordered starting on September 24 at 7 AM PT / 10 AM ET / 3 PM in the UK / 4 PM in Europe. Copies will be up for grabs here.