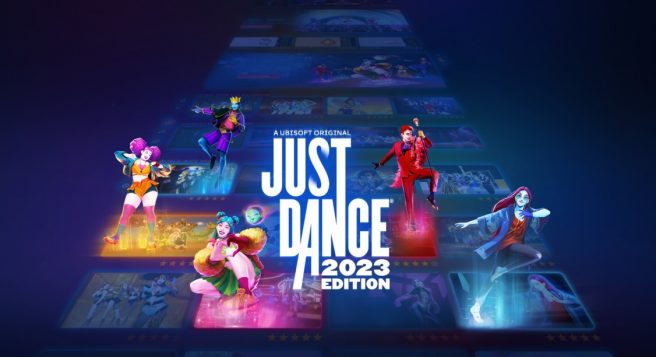 Ubisoft is continuing its popular dance game series with its latest entry, Just Dance 2023 Edition. Revealed during a Ubisoft Forward presentation today, the title will be reaching Switch on November 22, 2022.

Just Dance 2023 Edition will have free content updates on an ongoing basis and a number of new features, including online multiplayer, a new progression system, and more. Further information about what’s planned can be found below.

• Online Multiplayer: For the first time in the Just Dance franchise, players can enjoy the full game online with up to five of their friends or other players around the world with Online Groups. All players will be connected to the host’s menu, allowing them to interact with one another through the new emote stickers system, choose songs and hit the dance floor together, no matter where they’re located. Online Groups will support cross-play, while players can continue to enjoy local multiplayer as well!
• New Art Direction and Redesigned User Interface: Jump into a whole new world of Just Dance, complete with a fresh look and feel, immersive 3D worlds and intuitive navigation menus.
• Powerful Recommendation System: The new and improved recommendation system offers players personalized playlists and curated songs right at their fingertips.
• Progression and Rewards: Players can move up in the ranks with the brand-new progression system, allowing them to earn in-game points for each completed dance. These points will go toward unlocking new rewards, such as customizing dancer cards for the first time in Just Dance! Players can personalize their dancer card to fit their own personality by modifying the avatar, background, name badge and alias. They can also redeem points to receive emote stickers, which can be used to communicate with other players in Online Groups.
• Free Content Updates: Just Dance will provide regular, ongoing updates so players can expect new game modes, songs and themed seasons for years to come!

Ubisoft also says players can use the free app Just Dance Controller App on mobile, which turns your smartphone into a controller with its phone-scoring technology. Up to six players can dance without any additional accessories.