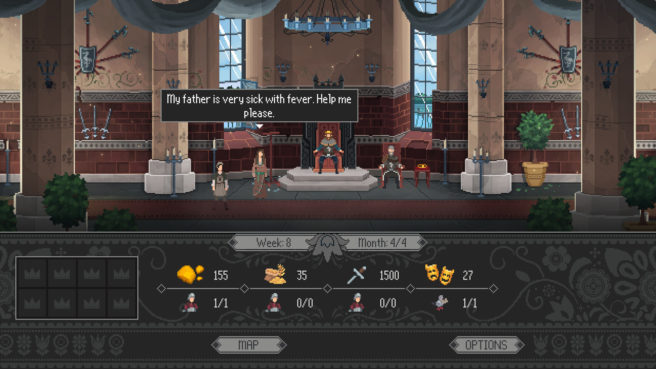 Publisher No More Robots and developer Brave at Night today announced Yes, Your Grace, a new kingdom management RPG. It will see a release on Switch sometime in 2020.

This is Davern, and you are its King. Famine and pestilence are spreading throughout the nation, and war cannot be far behind. In Yes, Your Grace you must lead your people through this darkness and into a brighter future, transforming potential chaos into lasting order.

– Six to eight-hour story filled with meaningful choices.
– A queue of your subjects to deal with every day, from pig farmers to potion sellers.
– Consequences to each choice, from dealing with your family to each peasant that drops by.
– Stunning pixel art throughout with bold use of color.
– Colorful cast of characters, with each of their needs different from the last.
– Deeply human stories within your own family and beyond.
– Challenging management systems including Generals, Hunters, and Witches.

Yes, Your Grace follows the story of King Eryk, ruler of Davern and father to three daughters—Lorsulia, Asalia, and Cedani. Having failed in producing an heir, Eryk has resorted to desperate measures, and promised his firstborn to a leader of the barbaric Free-People to the north. Now that Lorsulia is of age, this leader is coming to collect, bringing an army with him.

As the Free-People pillage Davern, villagers, merchants, and local Lords will travel to Eryk’s crumbling throne room to ask for gold, supplies, and the promise of protection from the monsters with red banners and steel claws. Struggling with the idea of letting his daughter leave with a brute, he concocts a new plan—to marry Lorsulia off to a nearby prince.

Ending in bloodshed and tears, Lorsulia’s wedding is a catastrophe that throws the entire kingdom into unrest. With no troops, a decaying castle, and a long line of visitors at the door, Eryk must rally his people, unite the Lords, and keep his family safe, no matter the cost.

– Every day your people will gather in the throne room looking for guidance, support, and supplies. From peasants with lost pigs to Lords with peculiar tastes, your gold will not stretch to everyone and everything. There are deals to be found but beware, not everyone has the Kingdom’s best interests at heart!
– Rebuild your castle, build your troops, and keep your family safe in the impending war. Defenses cost gold, be they generals or ballistae for the castle walls, and everyone visiting will want something/ Improving your castle may be costly, but it’ll be vital to fight back the encroaching darkness.
– Balance the whims of your family, as well as the Lords of your Kingdom. Feuds are plenty, but without the support of the local Lords you’ll lack gold, troops, and most importantly the supplies to keep your people from starving. Broker deals and invite the fortunate few to your castle, if you feel they can be loyal!

More: Brave at Night, No More Robots, Yes Your Grace