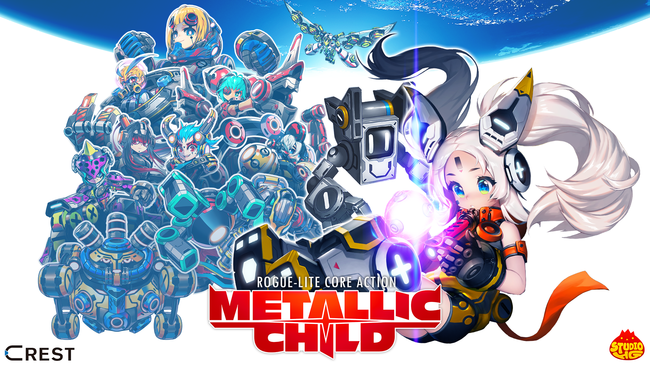 Crest and Studio HG have dated their roguelike action game Metallic Child. The title is lined up for a Switch release on September 16, the two sides announced today.

Also announced today is that Studio Trigger created an animated trailer, which will debut on July 7.

To recap, here’s an overview on Metallic Child:

Controlling Rona, who is unable to move on her own, you helped her in fighting against the rebellions of man-made robots in the space laboratory “Life Stream.” With the use of various weapons and core abilities in defeating huge enemies, you are getting closer to the truth behind the rebellion.

– Roguelike Action – To help Rona’s mission, you must make good use with numerous weapons and items, as well as the surrounding equipment. Each weapon has their own unique skills, using the weapons skillfully and mastering the powerful grasping technique, you will be able to participate and enjoy the high-tempo battles. Also, we have prepared various difficulty levels for players, so that even those who are not good at roguelike genres and action games can enjoy this game.
– Epic Boss Battles – Defeating the boss to get the “Core Jam” which carries enormous amount of energy. Over 10 types of boss will appear in the game, each of them possesses spectacular unique skills. Obtaining the jam after defeating the boss, allows you to acquire their skills as well!
– Various Cores – Various features are hidden within the energy-containing ball “Core.” Rona can acquire new powers through eating (?) other robots! Depending on the core to be installed, Rona’s performance will also change correspondingly, so try fighting your enemies with different strategies in every battle!
– Story and Quests – You can control Rona remotely after connecting with her. Help Rona and solve the unfolding massive rebellion in the Life Stream. Meet various people with Rona, and uncover the truth hidden in the Life Stream!

Metallic Child will be sold digitally for Switch via the eShop. It will include support for English, Japanese, Korean, and Chinese (Traditional and Simplified) language options.