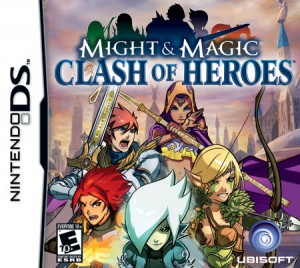 Not all gamers, let alone DS owners, are probably aware that the Might and Magic franchise has been around for a very long time. The series spans more than twenty years of history and there have been over a dozen titles released. However, Ubisoft acquired the rights to the franchise in 2003 and since then has given the series a complete overhaul. Now, for the first time, Might and Magic has made its way to the Nintendo DS. And while most would probably consider Might of Magic: Clash of Heroes to be a low-key release, the game is not only well-made, but it is also an addictive little gem.

On the surface, Clash of Heroes may appear to be a simple title. After just a few minutes of playtime, however, you’ll come to realize that the gameplay is very deep. The basic setup is that the touch screen acts as your base of actions for battle while the top screen is where all enemy activity takes place. In most instances, your main objective is to wipe out your opponent’s HP with charged attacks your units will carry out after a few turns.

There are three different unit types available: Core, Elite, and Champion. Core units are in more or less words standard troops while Elite and Champion units will cause more devastating damage. Basically, in order to execute attacks, you need to line up units of the same color. Core units will require 3 of the same color to be lined up vertically before they will be ready to charge up for attack. It’s pretty similar for elite and champion units as well – the only difference here is how many units they require before they are activated and how they’re lined up. 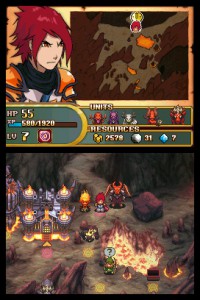 But there is much, much more to the game than simply charging up units. You can create walls for defense by lining up at least three core units horizontally, prepare chains, fusions, remove your own units from the field, and call in new units. I only wish that some sort of undo function was included. Sometimes an accidental move can lead to frustrating results.

Obviously, there is a whole lot of information to keep track of on the battlefield, which makes for a lot of micromanaging and strategical decisions. But you may be surprised to read that there isn’t a huge learning curve, even for those who haven’t had much experience with puzzle titles.

Clash of Heroes is indeed a very approachable game, perhaps in part due to its tutorials. Not all tutorials are mandatory to sit through, but the ones that are introduce you to the game’s mechanics in a very easygoing and engaging manner. Also, if, for some reason, you continue to struggle with the battle system, you can access the essential lessons from the game’s main menu. 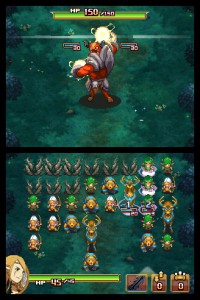 Clash of Heroes offers a few different modes of play (Campaign, Multiplayer, and Quick Battle). In the campaign mode, you’ll be playing through an entire adventure, split into chapters of sorts, in which the story is weaved in between overworld navigation and fighting. But unlike typical matches (such as the ones in Quick Battle), there will often be times when you’ll need to complete a task other than wiping out your opponents HP. Some instances of this variation include protecting a particular item, targeting characters to eliminate, and destroying specific bosses. Outside of battle, you can choose to take on puzzle quests, converse with NPCs, purchase Elite/Champion units, take on bounties and attempt to solve puzzle quests.

Even though tutorials will guide you early on, don’t think for a second that the game is easy to complete. The opponents you’ll face in the campaign often provide considerably difficult challenges and you’ll find yourself losing battles here and there. You’ll also discover that leveling up your character and units will be essential in some situations before you can progress. Doing so, however, doesn’t feel like a chore at all thanks to the fun battle system.

There is no doubt that when it comes to the graphics, Clash of Heroes is a very appealing game. All of the visuals are in complete 2D. Sprites are beautiful and the animation is fluid. There is a rather odd quirk about the animation, though. Characters navigating the overworld will always face you, in the same direction, even if they’re moving left, right, or north. The soundtrack is equally pleasing with standout, epic tunes that suits the game perfectly.

Might and Magic: Clash of Heroes is an entertaining puzzle title that will, most likely, be overlooked by some of the bigger releases this holiday such as The Legend of Zelda: Spirit Tracks. However, the game is essentially a must-buy for DS owners, regardless of one’s interest in the genre. Clash of Heroes offers a ton of content with a lengthy campaign, engrossing battles, and multiplayer fights. But most importantly, it is one of the strongest puzzle outings to have graced the DS.