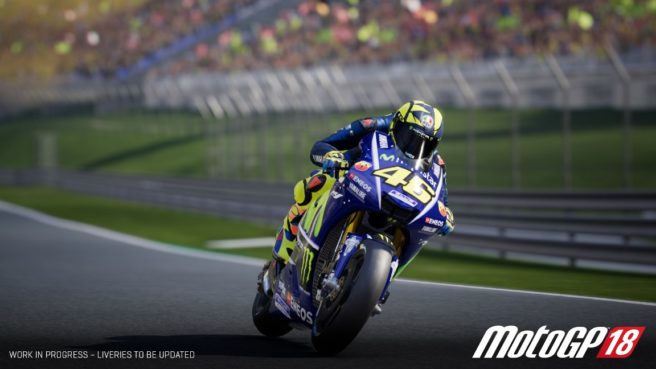 Milestone is taking another crack at racing games on Switch. Announced today, MotoGP 18 will be available on Nintendo’s console “shortly after” the initial June 7 launch.

MotoGP 18 will include all content from the 2018 MotoGP season as well as improved features. With the game now built in Unreal Engine, visual effects have been improved and physics have been reworked.

Here’s a rundown of featurs:

· The official 2018 MotoGP season, with all riders, official rosters from MotoGP, Moto2, Moto3 and Red Bull MotoGP Rookies Cup and all 19 official tracks, including the new Buriram International Circuit in Thailand;
· Faithful reproduction of riders, tracks and bikes, thanks to the Drone Scanning system, for a 1:1 recreation of all the track details, and the 3D scanning technology, to include real MotoGP™ riders’ faces in game;
· Exclusive improved features to make the game experience as immersive as ever, such as new cut scenes, the spectator mode and brand new interactive tutorials;
· Enhanced AI, Bike Physics and Collision System, with the introduction of riding aids to offer a more enjoyable simulation at every level;
· New scalable damage system and tire management system;
· A compelling career mode to climb the ladder from Red Bull MotoGP Rookies Cup to MotoGP class, including an innovative bike development setup, to significantly increase the bikes’ performance, as well as the MotoGP ID to keep track of such progress.

We also have this teaser: