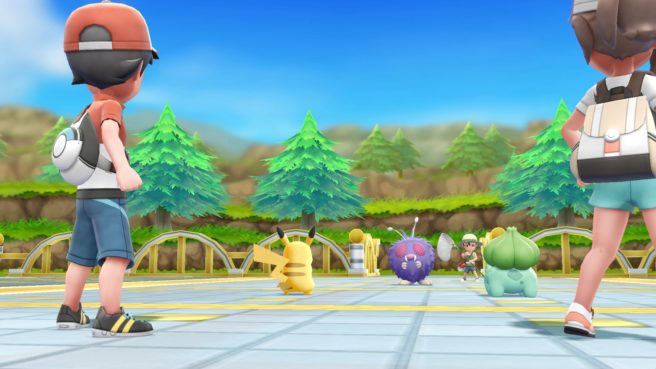 Update: Final nail in the coffin regarding online play – there is none. There is wireless and play on the same screen, but no online.

Original: The Pokemon press conference has officially wrapped up in Tokyo, Japan. Before the event ended, two separate Q&As were held. One was led by The Pokemon Company itself. The second was hosted by longtime Pokemon developer Junichi Masuda.

In the first Q&A, there were reports about Pokemon: Let’s Go, Pikachu! and Pokemon: Let’s Go, Eevee! not having any online features at all. However, during that second Q&A, Masuda allegedly confirmed that trading and battling can be done both locally and online. There was unfortunately no live stream event, so we’re relying on reports from those who were in attendance. Assuming online is in, it’s possible that the first Q&A only mentioned not using Nintendo Switch Online specifically, or co-op not being online. We’ll try to get final clarification as soon as possible.

In any case, on with the latest details:

– You will not be able to evolve your partner Pokemon
– However, can catch other Eevee/Pikachus you find in the wild
– Your partner Pokemon will take up one of your six party slots, and you will be able to box it
– Boxes work differently in that you now have a box in your bag
– The ability to transfer from Go/Let’s Go opens up about halfway through the game
– After that, you’ll be able to do it freely
– There are also minigames you can do when transferring lots of Pokemon over
– Candy from Go will not do anything in Let’s Go
– Won’t say whether you’ll be able to transfer Pokemon from Let’s Go and turn them into Candy
– Any Pokemon that’s large enough in Let’s Go you will automatically ride
– They had the idea to let you ride Pokemon of any size but decided against it
– No HMs
– Although the interface is different, you will still earn EXP from catching Pokemon, as well as trainer battles
– Event Pokemon in Go (Ash hat Pikachu, etc), cannot be transferred to Let’s Go
– The controls for catching Pokemon in handheld mode will have you moving the console around and pressing a button to throw; no touch screen, and the gyro part is required
– No additional details about Z-mode/Mega Evolutions in Let’s Go
– They haven’t locked down how experience from capturing Pokemon/trainer battles will be distributed (evenly, per Pokemon etc.)
– Trading and battling online between Switches will be available through online and local play
– As of right now, Masuda is saying that in general, only the original 150 Pokemon will be available in Let’s Go
– No news on player customization (at least for now)
– The plot of Let’s Go will not take you to Johto
– The map of Kanto, however, will be very similar to the original landmass, but there will be graphical differences
– Although there are some Alolan forms of Pokemon in Let’s Go, there are otherwise no connections between it and Sun/Moon
– There are once again two versions, which means all the usual Pokemon differences apply (individual Pokemon)
– No plot differences between the two