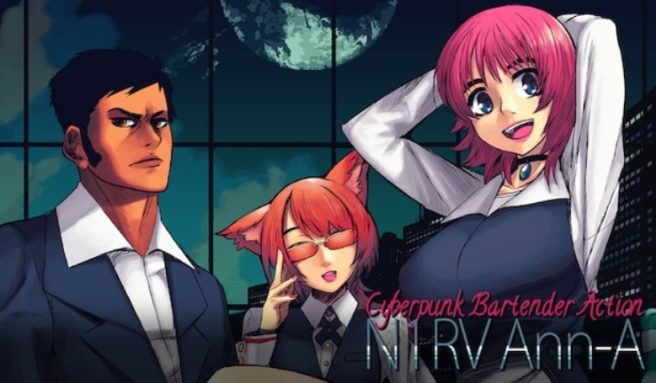 It’s been quite some time since we last heard about N1RV Ann-A. Sukeban Games finally provided an update today, but fans may be disappointed to hear that the VA-11 Hall-A sequel has been delayed indefinitely.

In a blog post, developer Fernando Damas brought up a number of contributing factors. Damas initially held on to the code despite having extra programmers on hand which resulted in extra development time, there was an internal conflict with the story that has since been solved, and the project “has effectively been reset on many fronts.”

A new release window won’t be shared as there’s still a lot of work that needs to be done. Any major announcements on that front “probably won’t happen until we’re at the final stretch of the project.” On the bright side, Sukeban Games will “use stricter planning to be able to be more transparent during development and provide regular updates on the state of the project”.

Many of you might’ve noticed that N1RV Ann-A had a projected release date of 2020 and that we’re at the end of 2020 with no announcement of any kind about that.

Well, the short of it is as follows: For the time being we’re changing N1RV Ann-A’s release date to an indefinite one and we’ll start shifting our public push towards other projects. N1RV Ann-A’s production won’t stop or slow down but it also won’t be our main promotional focus for a while.

Or for an even shorter version: N1RV Ann-A’s release date is now WID (When It’s Done) and we might have other projects to announce in the coming months that will come earlier than N1RV Ann-A.

Now, I could just leave it at this, but many of you might have questions. Why is this happening? Did the other projects cannibalize N1RV Ann-A? Is N1RV Ann-A being put on hold even though he just said production won’t stop?

So let’s talk about that shall we?

Let’s start with the most basic one: Why is this happening in the first place? After all we’ve shown demos at events and talked about how the game is gonna be.

The first falling of the delays fall squarely on my field. When N1RV Ann-A started production back in 2017 as the framework for another unrelated project that also needed a lot of text to be processed, it was still Kiririn and I handling things, so we kept work as we did during the VA-11 Hall-A days. As time went on and a lot of life-changing events happened I refused to relent control of the code even though we now had extra hands programming to help us with everything. The result was that I was heavily burned out while still insisting on being the sole programmer, the progress was really slow at this stage as a result.

How slow you ask? When I finally relented control of the code for the game to be rebuilt from scratch at the beginning of 2020 our programmer was able to rebuild everything I had done up till that point through explanations in about a month or less. With another month he was able to add a lot of missing features I outlined but wasn’t able to code in a timely manner.

With this you might be wondering why we didn’t make any faster progress. After all, if the framework was ready you just had to put stories in it. And the answer to that is creative differences. Thanks to circumstances I won’t go into detail here, there was an internal conflict on how the story should go. Ironing out those problems took time but the end result is a version of the story far better than anything we had previously envisioned.

As of the time of writing this post we have a clear idea for what the plot is and how it should go, and we’re taking steps so that we can restart production in a more formal way instead of keep doing things like in the days of VA-11 Hall-A where we did things as they came. More control means easier planning of a schedule which will be crucial if we want to accomplish all the big things that we want to do with N1RV Ann-A both in and out of the game.

However, you may be wondering, “Why change the date to WID instead of giving a clear one if you intend to have a tighter schedule?” The reason is that due to all these uprootings of the project, it has effectively been reset on many fronts. There’s much to be done before we can have any sort of public estimates. Date announcements or announcements of any kind for that matter probably won’t happen until we’re at the final stretch of the project. However, rather than go fully radio silent we intend to use stricter planning to be able to be more transparent during development and provide regular updates on the state of the project; it’s just the release date that will be undisclosed for a while.

A question this may bring to mind is, “Wait, you mentioned other projects. Did those cannibalize N1RV Ann-A?” Not really. Sukeban Games now consists of at least 6 people and we have enough resources to subcontract duties as needed. One of said projects was even started on the side during the period where I wouldn’t relent control of the code, a period where no progress in N1RV Ann-A could be made outside of myself because I was effectively holding it hostage and people gotta keep themselves busy.

Even with at least two side projects in parallel, we have enough breathing room where N1RV Ann-A won’t be compromised by a lack of attention. I’m technically the head writer and planner of this project and only this project, so during this planning phase no resources are being diverted away from N1RV Ann-A. When the time comes to move to another stage of development we can focus our resources accordingly depending on the current stage of each project. It’s our utmost interest that we don’t spread ourselves too thin.

And personally the last few months I’ve been learning how to pace myself in order to get back into work habits that aren’t dependent on periods of crunch and burnout but rather steady and constant work. After all, a chain is only as strong as its weakest link and this link needs to pick up the pace.

This is the part where I apologize on behalf of the team but especially myself. N1RV Ann-A’s production has been a complex beast full of even more growing pains than VA-11 Hall-A. I’ve been on a personal journey of self-improvement during its production and while I can say me, the team, and the project are in the best shape we’ve been in quite a while, time waits for nobody and it is now the end stretch of 2020 with the project at an earlier stage than it should be.

This I can promise you though, the next time you hear publicly and loudly of N1RV Ann-A it’ll be unforgettable, and when the project is done the wait will be worth it.

Until then, and with my most sincere apologies to everyone that’s been looking forward to the game, let’s make this a trip where everyone can see the road we’re taking.