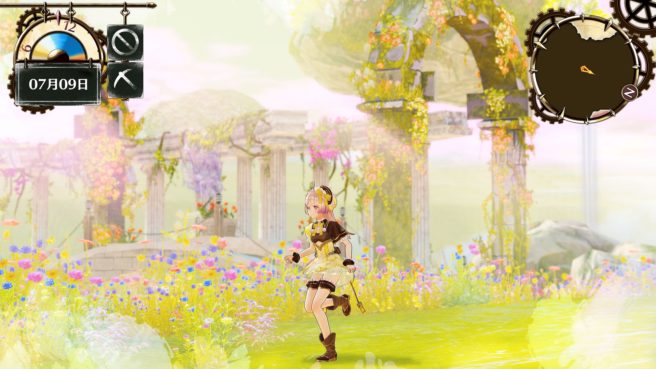 Thanks to Gematsu, another round of details are in for Atelier Lydie & Soeur: Alchemists of the Mysterious Painting. We’ve compiled all of the various tidbits below.

– Will depict the ordinary, everyday lives of twin sisters Lydie and Soeur, as well as take players on an adventure through the fantastic and mysterious worlds of paintings
– Atelier Lydie & Soeur will maximize the appeal of the Atelier series not found in other RPGs
– Based on the concept of coexistence between the ordinary and the extraordinary
– Utilizes a feature known as the “ordinary system” while interweaving extraordinary experiences within it
– In order to implement this, the theme of “paintings” was decided

– In Melveille, the capital of the Adalett Kingdom, a small atelier was established
– Beginner alchemists Lydie and Soeur live here
– The two pass the days while helping their alchemist father, had a dream
– “One day, I want to run the best atelier in the country”
– Contrary to their dream, the twins are still inexperienced
– While they are somewhat impatient regarding the deviation of the dream they embrace and reality, each day passes without concern
– The twins discovered a painting one day
– The painting was filled with a mysterious, dream-like world, with never before seen materials scattered like mountains
– Through their sudden encounter with the “mysterious painting,” the twins’ dream instantly became closer to reality

– The older twin sister
– A girl who works at her father’s small, not very well known atelier in Melveille, the capital of the Adalett Kingdom
– She is carefree, kind-hearted, and sociable
– She does things at her own pace and can be a bit airheaded
– She is not very good at moving her body
– She is good at studying, but has a unique sense for the arts

– The younger twin
– She works at the atelier together with her older sister Lydie
– She is a bright and lively tomboy. She can also be somewhat impish, and often teases her older sister
– She has the air of a genius, and is generally careless about everything
– Dislikes bugs and will cause a fuss if one even lands on her shoulder

Twins That Are Always Together

– Lydie and Soeur are twin sisters who help out their alchemist father and work at his atelier
– In order to become the number one atelier in the country, they spend each day working as hard as possible
– However, there is almost no work at the atelier, and they spend each day living at the level of bare subsistence
– It is within this environment that the twins’ bonds will become even stronger
– Lydie, as the more stable older sister, looks after her younger sister, Soeur, who she is often at the mercy of

The Worlds of Mysterious Paintings

– Lydie and Soeur run the atelier with the goal of becoming the number one atelier in the country
– Contrary to such dreams, the twins follow a routine daily life
– One day, the twins discover a painting in the basement of the atelier that significantly alters their fate
– In progressing through the story, they will come to know the worlds of many different paintings
– A world full of fantastic scenery such as blooming flowers and a floating island in the distance
– The world of this “mysterious painting” can be freely explored
– Materials that cannot be found in the real world can be found in the worlds of paintings

Dreams Become Reality Through the Worlds of Mysterious Paintings

– By exploring the worlds of these paintings and gathering materials, and by using rare materials obtained by defeating the monsters they encounter, the twins’ alchemy skills will increase
– Their goal is to clear challenges and the like, receive regular evaluations from the country, raise their Atelier Rank, and become the number one atelier
– (1) Explore the worlds of paintings and synthesize the materials you obtain
– Explore the worlds of various paintings and obtain rare materials
– You will be able to explore various mysterious paintings depending on your Atelier Rank
– (2) Improve your alchemy and increase your evaluation from the country
– In the capital city of Melveille, where the twins live, there are plenty of requests, challenges, and the like seeking synthesis
– By increasing your evaluation from the capital, your Atelier Rank will rise

– The battles of this game use a front and rear team-based “Combination Battle” system
– It is a battle style matched to the “twin protagonists,” whose battle style changes depending on the formation of the team
– There is also a “Battle Mix” system that allows players to synthesize during battle
– This is a more strategic and dynamic battle system than ever before

Teams are the Key to Battle

– During battle, you can synthesize the materials you have gathered using the new “Battle Mix” system
– By instantly creating items, you can use the “Battle-Exclusive Synthesis Command”
– Through this, you will be able to synthesize on the spot, and enjoy diverse and extensive battles