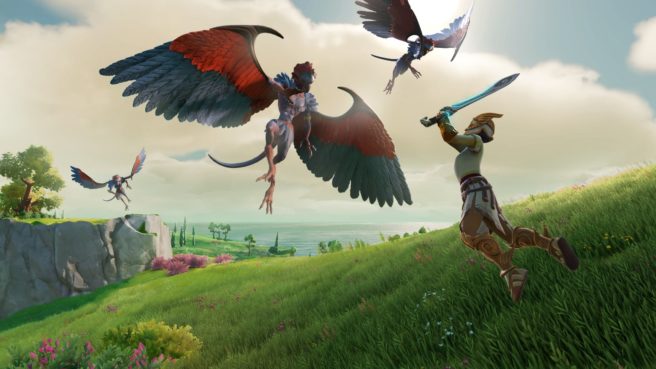 To close out its E3 2019 press conference, Ubisoft unveiled its new IP Gods & Monsters. Kotaku managed to score some additional details about the game as well as some comments from creative director Jonathan Dumont.

– Set on the Island of the Blessed
– Customize a character who can run around a vast world, jumping, swinging a sword, shooting a bow and arrow, floating from high perches using a special bird power
– Can use some sort of telekinetic ability to toss trees at enemies and has their movement limited by an exhaustible stamina meter
– Ubisoft Quebec’s tools have allowed them to release another game so soon after Assassin’s Creed Odyssey
– The game is presented as a tale told by the poet Homer to his grandchildren
– The game trades heavily on the research the Assassin’s Creed Odyssey team did about Greek mythology while making that game
– Gods & Monsters is a more all-ages game than Odyssey
– The player is the most courageous hero of all time, a character called Phoenix who can be equipped with special ability-enhancing gear and who will venture into the underworld to fight monsters of myth
– The game has allowed the Odyssey team to play with character movement, to present challenges and puzzles that require the kind of clever traversal that Odyssey seldom asked of players
– The game has been in the works since late last year
– Full-sized action role-playing game

“It’s flattering that we can be compared to that, but from a storytelling point of view it’s going to be a very unique adventure. The abilities will change, as well as the scope of how it blows up. It is influenced a lot more by Odyssey in that sense mechanically. The fact that we can choose and create our own character and customize it as well, there’s quite a bit that will make it its own.”