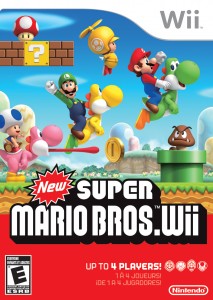 Nintendo and Shigeru Miyamoto return Mario back to the realm of 2-D once again for New Super Mario Bros. Wii. This time up to four players can join in on the platforming goodness that originally made the Super Mario Bros. franchise such a smash sensation all those years ago. Unsurprisingly, Princess Peach has been kidnapped by Bowser & Co. and it’s up to you (and three of your closest friends) to once again rescue the princess and set things right in the Mushroom Kingdom.

Gameplay: Without doubt, gameplay is the hallmark of all Mario titles and NSMBW doesn’t stray from the familiar formula one iota. The game is a sublime balance of platforming and puzzle solving, sure to satisfy any old-school gamer or fan of the Super Mario Bros. series. The game designers have tipped their red hats to the old school crowd of Super Mario veterans by incorporating familiar secrets and gameplay tricks from previous 2-D entries of the series as well as many of the game mechanics that had been pioneered by the series earlier titles.

The title’s new suits add a new spin on the gameplay and a dose of fun to the mix while making great additions to the series long history of power-ups. Most players will find the red propeller jumpsuit to be an instant favorite, while the penguin suit offers a plethora of gameplay advantages within the stages it is found. The shrinking mushroom and ice flower also add a notable amount of fun in the game as well.

Collecting the three golden coins found throughout each of the games stages is a definite “enabler” for obsessive-compulsive gaming completionists, but in the end a rewarding feat.

Controls: The game retains the same smooth and responsive controls that we’ve come to expect from the series over the years. The simple yet effective control scheme is what makes this title and it’s predecessors so accessible and enjoyable to play. The motion controls are appropriately implemented into the game, insuring that they never come off feeling gimmicky or unnecessary. Instead the motion controls offer another level of gameplay and make a welcomed addition to the series.

Graphics: NSMBW isn’t a title that pushes the Wii to its graphical limits but it’s still a great looking 2-D title that offers some impressive visuals and effects. Some of the cooler graphical effects include the POW box explosions, and the cloud clearing effect as well as some of the games lighting effects.

Sound: NSMBW is choke-full of redone and remixed versions of the most popular Mario tunes of yester-year, while incorporating some great sounding new compositions as well. The game is filled with all the same familiar sounds you’ve come to expect from the series.

None. (the sound of crickets chirping)

Double the pleasure: How do you improve upon NSMBW? By bundling it with an equally great sequel, so that it could be played immediately after finishing this game.

Online Play: Not everyone has friends which wait on stand-by to be invited over to play video games, so the addition of an online feature for the title would be greatly appreciated, especially if it allowed players to play through the game and saved their progress so that when the player decides to play offline, none of the progress they’ve made would be lost.

Empower the Players: Implementing a play mechanic which allows a player to see how a level should be traversed (auto-play) after multiple failings is great, but giving the player the option to turn off such a feature would be better.

The Verdict: Worth Owning (Another reason to own a Nintendo Wii)

If one were to create the ultimate 2-D Mario game which payed homage to all of the other 2-D games of the main series (SMB-World) yet still offered enough gameplay innovations to stand apart as its own title, what would that game be like? Responses to such a question could span several hundred thousand threads and a countless number of posts on gaming forums across the Internet. Thankfully though, one only needs to play New Super Mario Bros. Wii to find out.

NSMBW is a nostalgic romp through Nintendo’s past (and incidentally my childhood as well) whereby it blends familiar level design, gameplay mechanics, and Super Mario platforming-goodness along with a difficulty that perfectly balances between old-school NES controller-throwing frustration and “not too difficult, yet fun and satisfying”.

While most will certainly enjoy NSMBW, it’s the old-school and retro gamers that will really get the most out of the title as the majority of its “Easter-Eggs” and homages hearken back to the first four Super Mario Bros titles. A great example of this can be found during a particular stage in level 2 of the game. The player will notice many long sand falls or quick sand pits, but only a seasoned Mario veteran (who has played through the North American version of Super Mario Bros. 2) would have the wisdom to know to let him or herself be pulled down to the bottom of one of these normally life-ending traps, only to have uncovered a secret area within the stage. It’s this kind of recognition by the games designers to the expert Mario gamer which adds another level of appreciation to the game (as well as the gamers) and serves to make NSMBW such a special title.

The game’s biggest innovation (the multiplayer) is definitely a two-edged sword. Some gamers will find the multiplayer a blessing while other gamers will curse its inception. This of course hinges upon the type of gamer you’re playing with. In some cases I really enjoyed playing this title with a friend; the cooperative aspect of gameplay enriched the experience even more than playing through the title solo. But in other cases my patience was severely tested as I found myself questioning some friendships altogether. Suffice it to say, NSMBW is the kind of game that has the potential to incite a brutal fight to the death amongst life-long friends. Consider yourself warned.

So is New Super Mario Bros. the best 2-D Mario title to date? Yes. But it’s a title that rests upon the shoulder of giants. In many ways NSMBW owes a lot of its greatness to the Mario games before it, without which this game might not have been possible. Many critics have said that they didn’t think Yoshi played a big enough part in the game, a criticism which I firmly disregard. I found Yoshi’s appearances during the game to be abundant. Thankfully the games designers didn’t over indulge themselves by using Yoshi in every level. Instead, Yoshi’s use is purely gameplay oriented and purposeful, not cosmetic.

With NSMBW Nintendo have not only created the best 2-D Mario title to date, but have also successfully created a game that appeals to the hardcore gamer while being an accessible title for the casual crowd without watering down the experience; an amazing achievement within itself. Clearly Nintendo have shown it possible to create a game for both markets and in doing so have layed the foundation with NSMBW. This title should be in every gamers library; hardcore and casual alike.