NHRA: Speed For All, drag racing game, heading to Switch 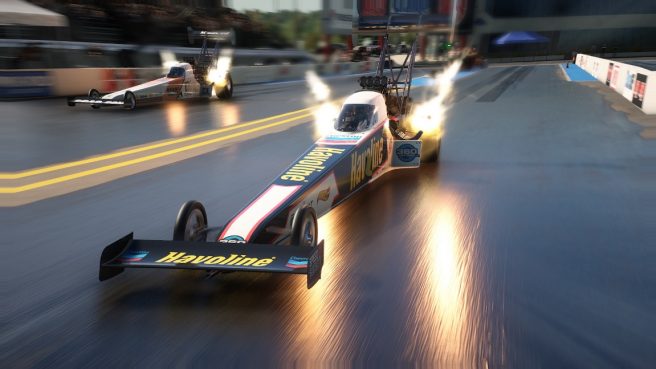 Publisher GameMill Entertainment and developer Team6 Game Studios today announced NHRA: Speed For All, a drag racing video game based on the world’s largest auto racing organization. Switch owners can pick it up starting on August 26, 2022.

NHRA: Speed For All is the most authentic NHRA game ever, fully immersing you in the genuine teams, tracks, vehicles, tuning and strategies of this fiercely competitive motorsport. Strap into the driver’s seat across a range of exciting game modes in your quest to become the ultimate drag racing champion.

We have the first trailer for NHRA: Speed For All below.

NHRA: Speed For All will be offered with Deluxe and Ultimate Editions, priced at $59.99 and $79.99 respectively. These special editions contain both the base game and additional, specially designed vehicle models, driver suits, vehicle haulers, and parachutes. The Deluxe Edition also packs in the bonus John Force Racing Pack, putting players in control of legendary racer John Force’s team. The Ultimate Edition contains everything in the Deluxe Edition plus the Battle Ready Pack, Moonshot Pack, Electro Blitz Pack, and Nitro Fire Pack – this is the only way to obtain these packs.