Ninja Box – details on defending a secret base 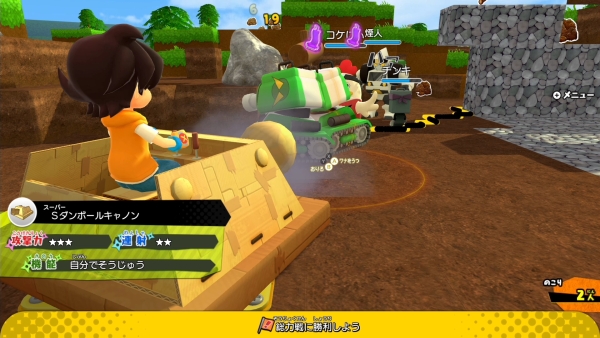 Bandai Namco is back again with more details on Ninja Box, this time covering how players will be able to defend their secret bases from enemies.

Those interested can check out the slew of information, as translated by Gematsu, below.

As you progress through the story, Bukkowa Company’s “Warp Devices” will start to appear in your secret base, from which their underlings will attack. The underlings will make their way towards the Ninja Box, and if a set number of enemies manage to reach the Ninja Box, you will be defeated, so defeat them all before they get there. You will have a few minutes to get ready between the appearance of the Warp Devices and the appearance of actual enemies, so prepare your counterattack in the meantime.

—The time until the enemy attacks is shown in the lower left corner of the screen. When there is less than a minute left, a warning will appear in the middle of the screen. Since several Warp Devices will appear, be sure to confirm their locations ahead of the battle. If you do not want to wait for the enemy to appear, lie down on a bed inside and time will move faster. —When the time until the enemy attacks reaches zero, the battle will begin. The Warp Devices where the enemy appear will emit a light like a camera flash. —Victory is attained by defeating all the enemies. Your NinTube views will increase if you defeat enemies with traps, and you can gain experience points for your runaway ninjas by utilizing them in battle. There are various enemy types, including enemies that attack at close-range, enemies that fire missiles at long-range, enemies that guard against attacks with shields, and more. Also, non-humanoid type enemies like tanks and drones will also appear, so make effective use of your runaway ninjas and traps to repel them.

—Bukkowa Company’s humanoid subordinates will attack at close range. There are even types with shields that will guard against direct attacks. —Tank enemies have high stamina. If you do not use a high firepower trap such as the Cardboard Cannon, then defeating them is going to be tough. —Drone enemies move quickly and through the sky, making them difficult to hit. Counter them from long range with projectile weapon attacks, or with a runaway ninja. The enemies that appear from the Warp Device will head towards the Ninja Box via the route indicated by the yellow and black line. This route changes depending on the location of the Ninja Box. Place traps and runaway ninjas within the attack range of the route. As you progress through the story, enemies will also target Generators and Vaults.

—During the time before the enemy attacks, you can check the enemy’s attack route and silhouettes of the underlings that will appear. —If an enemy reaches one of your Generators or Vaults, they can steal stored electricity or money. Defeat them quickly. —Enemies can also move through interiors on their route, and even destroy traps. Enemies will make their way to the Ninja Box via the optimal route, but by placing things such as building materials over the route to create obstacles, their course will change. Use this to place materials over a route and lead an enemy into a trap.

—Placing building materials over a route to block the enemy’s path will cause them to change course. Place, remove, and adjust materials for the best possible result. —Other than placing materials, the enemy’s route can also change by breaking the terrain with your hammer. —If you have a wall with a door placed somewhere, enemies will use that door. Utilize this behavior to manipulate the enemy’s direction. Repel the Enemy with Traps

Since traps cannot operate unless plugged into a power outlet, traps may not be able to attack if a power outlet is too far from the enemy’s route. When an enemy does not enter a trap’s attack range, make use of walls and such to guide the enemy towards an outlet.

—For situations where the enemy passes within range of a power outlet, it is good to install traps with narrow attack range, but rapid fire power. —In situations where a power outlet is too far from a power outlet, the most effect traps are those with wide attack range and long distance attacking. —Walls may get in the way of your counterattack. You should have good visibility around the area of a trap. You can also counterattack enemies with the runaway ninjas stationed at your secret base. Unlike traps, runaway ninjas can be placed anywhere. Their HP can be recovered using items, so fight while recovering often to avoid being defeated.

—It is a good idea to place runaway ninjas in places where there are little traps to fortify your defenses. —Runaway ninjas that can attack from long distances should be placed a little bit outside of the enemy’s attack route to avoid a counterattack. —Runaway ninjas that can attack at close range are easily susceptible to the enemy’s counterattack. Dispatch them effectively as sets with traps. When you defeat every enemy, a Bukkow Company boss may appear. Unlike underlings, bosses do not aim for the Ninja Box, but move around freely and attack the protagonist. While their attacks are powerful, they also leave themselves wide open, so avoid their attacks while accurately dealing damage.

—Boss attacks can destroy building materials. You should try to fight in places where there are as little structures as possible. —After a boss attacks, they will leave a wide opening for you to attack. When you see the “Chance” notification appear above its head, damage it with runaway ninjas and traps. —As you progress through the story, you will fight bosses in places other than your secret base. You will not be able to use traps during those battles, and must rely solely on runaway ninjas.