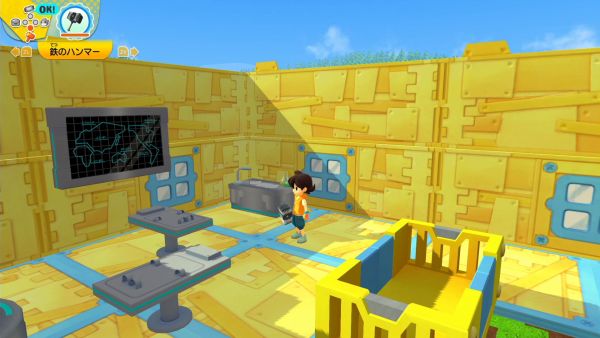 Bandai Namco has shared new details on base creation that players can do in Ninja Box, as well as information on the use of traps.

The translated information comes our way from Gematsu. You can check out the details below.

Craft the Hammer You Need to Collect Junk

In order to break soil, rocks, and placed materials, you will need to craft a hammer from blocks. The more materials in your possession, the stronger the hammer you can create. For example, you can create a “Wood Hammer” from wood blocks, or a “Plastic Hammer” from plastic blocks. You should make plenty of spare hammers since hammers will break as you continue to use them.

—Blocks are required to create a hammer. Since the soil hammer is the only one that can be created without blocks, it comes in handy when you do not have any blocks in your possession. —The stronger your hammer, the higher its durability and the easier it is to break items. Powerful hammers can even break through hard rocks. Create Blocks from the Junk You Collect

Junk such as “useless cardboard” cannot be used as is. But by giving such junk to the Ninja Box, you will receive blocks in return. If you have items in possession and use the Ninja Box, you can automatically process them into blocks. The more new blocks you create, the greater the variation of materials you can craft.

—By using the Ninja Box, you can process and receive blocks. You can also process all the junk in your possession into blocks together. —In total, there are 12 types of blocks you can create, which are indicated in the upper-right of the screen. As you obtain new junk, you will be able to create different types of blocks. —Just like junk, blocks cannot be used by simply having them in your possession. Save them up and bring them to the Ninja Box for processing. By handing your blocks over to the Ninja Box, you can create building materials such as a “wood wall.” The number of materials you can create increases as you acquire new blocks, but remember that some materials require electricity to create.

—There are various types of walls that require the same items to create, such as those with doors or windows attached. Start off by using these walls to build your secret base. —At first, you can only craft materials from cardboard or wood, but as you progress you will be able to craft materials such as plastic and iron walls. If you have building materials made out of plastic or iron, simply placing them will increase your views on NinTube. —When electricity is required to craft something, the power it consumes is displayed in the “Required Wattage” field of the screen. You can build up electricity by placing an “Generator.” You can construct buildings by crafting materials such as walls. Start by making a room that closes up on all four sides, then decorate the interior. The more blocks in your possession, the bigger the room you can make. By using a staircase, you can even create a two-story building.

—Use several walls to create a room. But be careful as you may not be able to enter or exit if you do not have any walls with doors attached. —When placing materials, use the L or R buttons to place them either above or below your character. You can also press the A button to rotate the material. —You can build a room in a higher place by using a staircase. Once you set up the flooring and secure a foothold, you can place down walls to create a room. Traps can be installed via power outlets, which activate when the enemy is in attack range. Since these are an important means of intercepting the enemy Bukkowa Company’s attacks, you should create various types of traps. Since Bukkowa Company’s goal is to capture the Ninja Box, installing traps to obstruct their attack route is one of the basics of defense.

—Each trap has set “rapid-fire,” “offensive power,” and “functionality” abilities. Each ability can be checked when crafting a trap. —Most traps attack automatically, but some traps such as the Cardboard Cannon need to be operated yourself. Since you can determine the attack direction and timing yourself, these sorts of traps are extremely versatile. Decorate Your Secret Base

From the “generators” to “warehouses” that come in handy when developing a secret base, furniture that you can decorate rooms with, and more, there are various types of interiors. Since there are also interiors that aid in the construction process, such as elevators and escalators, you should combine them in various ways to build a grand secret base.

—Installed interiors such as a chair for sitting or bed for laying can actually be used. —Special interiors such as generators and vaults can be used by being placed in a power outlet. But be careful as they cannot be used once removed from the power outlet. —The elevator can be entered and operated manually. It comes in handy when constructing tall buildings. An Example of Building a Secret Base

—A type of secret base in which you can move between floors via escalator. You can place different interiors on each floor to make them unique, or decorate them the same to give off a sense of unity. —By using an elevator, you can create rooms in fairly high places. After stacking walls and using the elevator to rise up to the top and place flooring, you can break the walls to create a room that floats in the sky.