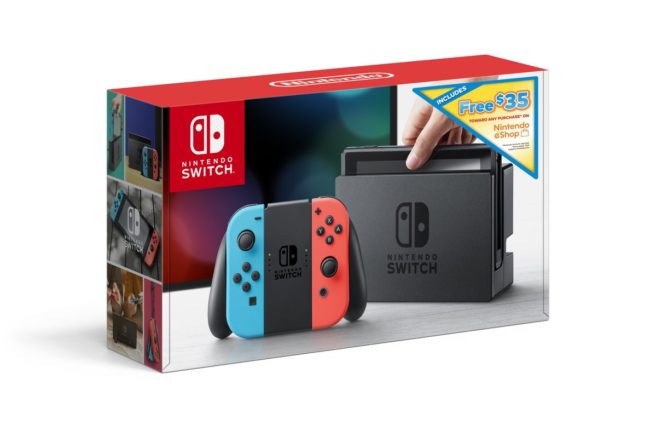 Nintendo has announced a new Switch bundle for North America, though it’s one that doesn’t include a specific game. Starting February 14, consumers will be able to purchase a package that comes with $35 in eShop credit.

Nintendo says the bundle “is available while supplies last.”

REDMOND, Wash., Feb. 7, 2019 – Starting on Feb. 15, a new Nintendo Switch bundle hits store shelves that includes a nice bit of digital cash that can be used toward buying the most popular games. The Nintendo Switch + $35 Nintendo eShop Credit Download Code bundle will be available at a suggested retail price of $299.99 and comes packed with a bonus $35 credit to use directly in Nintendo eShop.

Nintendo Switch is home to many critically acclaimed and award-winning games – and nearly all of them can be purchased and downloaded in Nintendo eShop. Nintendo’s digital storefront is a convenient place to browse and purchase some of the most talked-about games on Nintendo Switch, including games like Super Smash Bros. Ultimate, Super Mario Odyssey, NBA 2K19, Fortnite and FIFA 19, as well as indie hits like Hollow Knight, Celeste, GRIS and Overcooked! 2. Downloaded games live directly on the Nintendo Switch system, so it’s ideal for gamers who want all their games in one place, as there’s no need to carry around game cards.

“We wanted to make it easier for consumers to purchase their first game after picking up a new Nintendo Switch system,” said Doug Bowser, Nintendo of America’s Senior Vice President of Sales and Marketing. “New Nintendo Switch owners can explore Nintendo eShop and use the bonus $35 credit toward the purchase of a game that’s perfect for them.”

When browsing Nintendo eShop, Nintendo Switch owners will find games everyone will love across nearly every genre, including recently released games like popular platformer New Super Mario Bros. U Deluxe, two-player co-op action game Travis Strikes Again: No More Heroes from Grasshopper Manufacture Inc. and turn-based strategy game Wargroove from Chucklefish LTD. On March 29, players can cozy up to the Yoshi’s Crafted World game and journey through themed stages to solve puzzles and find hidden treasures. On the flip side, stages can be played backward, providing new perspectives to explore and a new challenge to locate all the hidden Poochy Pups. On April 23, the Mortal Kombat series comes to Nintendo Switch for the first time with Mortal Kombat 11, the next evolution of the iconic franchise.

This new Nintendo Switch bundle is available while supplies last.