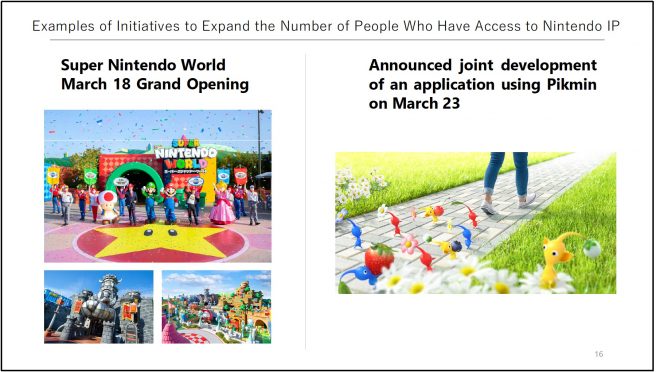 Nintendo briefly touched on its IP expansion plans as part of its latest financial results.

Super Nintendo World recently opened at Universal Studios Japan (though it was temporarily closed due an increase in coronavirus cases) and a new Pikmin app is in the works. The company also teased that it is “continuing to work on various other initiatives to expand the number of people who have access to Nintendo IP.”

This slide shows our main initiatives for expanding the number of people who have access to Nintendo IP in order to continually invigorate our dedicated video game platform business.

Super Nintendo World at Universal Studios Japan, where people can realistically experience the world of Mario, saw its grand opening on March 18. In addition to attractions that offer new experiences like Mario Kart: Koopa’s Challenge, there are also activities scattered throughout the area that let you fully experience the world of Mario, including “? Blocks” that you can actually punch.

On March 23, we announced that we are working with Niantic to develop a Pikmin application for smart devices with the theme of “making walking fun.” Through this application, we hope to deliver an experience in a new field, one different from games. The application is scheduled to be released globally through Niantic in the second half of 2021.

We are also continuing to work on various other initiatives to expand the number of people who have access to Nintendo IP.