Nintendo on sell-through of Switch hardware 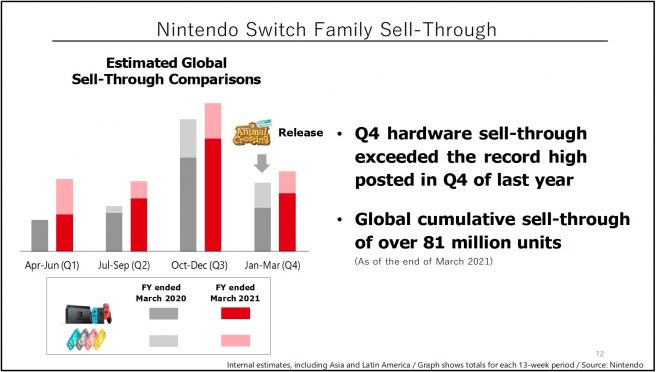 In its latest financial report, Nintendo spoke about the sell-through of Switch hardware – meaning what was actually purchased by consumers.

So far, we have been talking about sell-in, or unit sales by the Nintendo group to our business partners. Now let’s turn the discussion to sell-through, which is the number of units purchased by consumers.

Looking at sell-through of the overall Nintendo Switch family over the full fiscal year, the release of software titles like Animal Crossing: New Horizons provided encouragement for new consumers to purchase a system and for existing owners to purchase a second system during the first half, and that momentum remained strong into the second half. March marked the beginning of the fifth year of Nintendo Switch sales, and we feel that we are headed for additional growth. As of the end of March 2021, global cumulative sell-through of the overall Nintendo Switch family surpassed 81 million units.