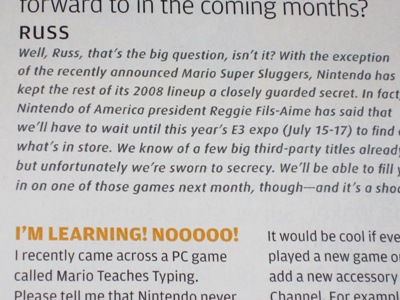 In response to a reader mail question about upcoming games the reader mail editor is interested in, Nintendo Power writes, “…We know of a few big third-party titles already, but unfortunately we’re sworn to secrecy. We’ll be able to fill you in on one of those games next month, though – and it’s a shocker!” If this is to be believed, rumors that the moon features hints of Earthbound, Majora’s Mask, and other titles developed by Nintendo can be ruled out. However, on the last page of Nintendo Power, the preview notes did mention that magazine will have “a surprise or two.” So, although the main surprise in next month’s issue appears to be a third-party title (if it wasn’t, why would Nintendo Power be providing hints?), there is still a chance that an additional game may be revealed. Essentially, it all depends on how you interpret the preview notes for the next issue.