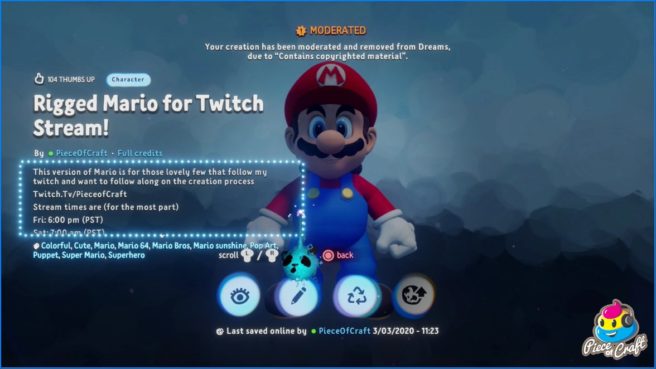 Last month, Sony and Media Molecule released Dreams on PlayStation 4. It can be thought of more as creation software rather than a traditional title as it lets users make all sorts of experiences, including games.

Naturally, all sorts of licensed-based projects have flooded Dreams over the past few weeks. Nintendo is no stranger to the PS4 release as users have uploaded creations based on Mario, Donkey Kong, and more. The Big N isn’t happy about that, and has now started to take action.

Twitter user Piece_of_Craft says his project, which featured Mario, was taken down because of a copyright strike. In an email received, Nintendo is specifically mentioned as the company that filed the game. You can bet that anything made in Dreams with Nintendo content could be subject to removal going forward.