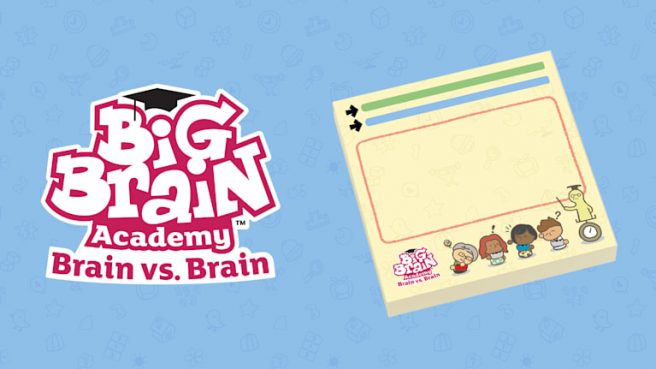 Consumers can now pre-order Big Brain Academy: Brain vs. Brain from the UK My Nintendo store where a bonus is available. By reserving the game, you’ll receive a set of sticky notes. You can check out the design above.

Those that already pre-ordered the game – be it physical or digital – don’t have to take any action. Nintendo says that all previous orders will automatically be upgraded.

Big Brain Academy: Brain vs. Brain is the first new entry in the series in more than a decade. Nintendo previously made these titles for Wii and DS.

Here’s some information about the upcoming Switch title:

Take on a series of brain-bending activities that test your mental mettle in Big Brain Academy: Brain vs. Brain for the Nintendo Switch system! Play a wide variety of activities, like memorizing a series of numbers, identifying an animal as it slowly comes into focus, or helping guide a train to its goal in fun, fast activities. Go brain-to-brain with friends and family in 4-player matches to see who gets the highest score. Everyone can play together at varying difficulties, so a kid can hold their own against an adult in this battle of the brains!

Treat your brain to some quick mental fun

Get your own Big Brain Brawn score with a fun test. Boost your skill and speed by practicing certain activities. Of course, you can also prep for your next multiplayer brain battle or compare scores with friends and family. Unlock dozens of outfit options for your in-game avatar – from a cat outfit to a corn costume!

Go brain vs. brain against mind-masters near and far

Big Brain Academy: Brain vs. Brain launches for Switch on December 3, and fans can place a pre-order with the bonus from the UK My Nintendo Store here.