Posted on October 7, 2017 by Brian(@NE_Brian) in General Nintendo, News 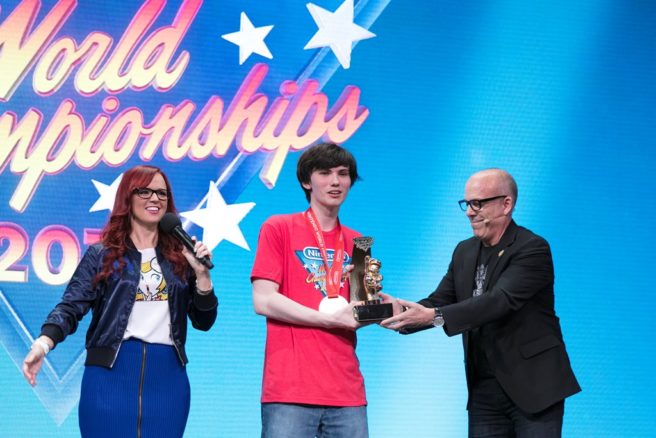 Nintendo published an announcement recapping all of the action that took place at the Nintendo World Championships 2017 today. Read it in full below.

REDMOND, Wash.–(BUSINESS WIRE)– A champion has been crowned! After battling it out through multiple rounds, Thomas Gonda, 21, of Oakland, California, has earned the title of Nintendo World Championships 2017 winner. Gonda, a self-proclaimed lifelong runner-up, came out on top this time and received a beautiful trophy commemorating his incredible achievement.

Hosted by gaming personality Andrea Rene, the Nintendo World Championships 2017 followed 24 competitors through a challenging gauntlet showcasing a wide array of Nintendo games. The competitors not only had to master games on recent systems like Nintendo Switch and Nintendo 3DS, but also on games spanning many systems throughout Nintendo history, including NES, Game Boy Color, Nintendo 64 and Nintendo DS.

Sixteen of the competitors were the winners of their respective local qualifying rounds at Best Buy retail locations (eight from the 13-and-over group and eight who are 12 and under), while the other eight, including English actor Asa Butterfield, WWE Superstar Bayley and notable gamers from Germany, Mexico and Canada, were invited guests. Starting with a unique three-game opening stage including a shield-surfing challenge in The Legend of Zelda: Breath of the Wild, over a series of rounds the 24 were whittled down to two finalists: Gonda and Nintendo World Championships 2015 winner John Numbers. At this point, the two final competitors participated in a three-part finale in Super Mario Odyssey. After a nail-biting and cap-throwing final round, Gonda emerged victorious.

“We congratulate Thomas Gonda on his victory tonight. Nintendo World Championships 2017 showcases the best competitive spirit and sportsmanship of the Nintendo fan community,” said Doug Bowser, Nintendo of America’s Senior Vice President of Sales and Marketing. “Whether players compete on a global stage or with friends and family members in the living room or on the go, Nintendo games always deliver fun times and big smiles.”

The Nintendo games played in the tournament included the following:

* The Underground Stages were competitions between the contestants that failed to advance in the normal Stages. The winner of the Underground stages rejoined the main tournament in the Finals.