Note: This review is written by a GamingEverything writer, Jack. I’m posting it here because I thought you’d find it entertaining, and iMovie disappeared so I can’t do “That One Show” tonight.

I’ve always been a fan of Gaijin Games’ Bit.Trip series, so when I heard last year that a fourth one was coming out that would combine the series’ retro feel with my favorite genre in gaming (platforming) as an homage to Pitfall, I was ecstatic. Unfortunately, I didn’t get around to buying it until just this past week, but it was definitely worth the wait. Bit.Trip Runner takes great accessibility, beautiful new graphics, old school difficulty, and the same dynamic rhythmic gameplay the Bit.Trip series is known for and combines it into one of the best WiiWare releases to date.

Bit.Trip Runner is part of the small but growing on-rails platform genre (why is everything better on-rails?). Players control the protagonist of few words, Commander Video, as he frenetically runs through a brightly-lit 2D world while trying to avoid every obstacle that crosses his path, including large pipes, overheating radiators, and holes in the ground. With the Wiimote held sideways, the ‘2’ button allows the Commander to jump over dangerous obstacles, and when held, float for a split second in mid-air. Down on the d-pad allows CV to duck to avoid flying obstacles, while a press of the up button makes him leap upwards whenever he runs on top of a square spring to bound over large gaps. Later on in the game, a kick and block are added to his dodging repertoire. Control was always smooth and, since there were only five moves, was very effortless to grasp and never felt like too much to handle. The ease of entry makes Runner the most accessible Bit.Trip game yet.

Aesthetically, Bit.Trip Runner is easily the most different of the series so far as it eschews the ‘Trip’ in ‘Bit.Trip’. The abstract colors and 8-bit images that freely meandered throughout the background in previous iterations have been replaced with concrete images like waterfalls, grass plains, and urban landscapes. The graphical style itself also changed; instead of actually appearing to be an Atari game, Gaijin decided to modernize the pixelation a la 3D Bit Heroes, pushing the accessibility of the game further. Part of what hooked me on the series in the first place was its arcade authenticity, so I was a little sad to see it go, but Runner’s scintillating palette never once made me wish it would revert to its former graphical approach. 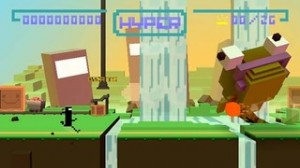 The gameplay of Runner also takes a few steps in another direction from the template we’ve been given with the first three Bit.Trip games. The game is divided into three worlds with twelve levels (eleven courses followed by a boss level) apiece, as opposed to having three songs divided into a few sections with a boss at the end. Also new is the auto-restart feature- instead of a Nether screen appearing after the player gets hit by too many foreign objects to warn of impending doom, Commander Video instantly warps back to the start of the level if you fail to dodge a single obstruction, and play commences immediately again. This is probably the best new feature of the game, as it allows you to memorize dodge patterns easier without having to hassle with lives or with menu select screens; because of the instant gratification the auto-restart feature brings with it, it is very easy to lose track of how many times you’ve died and retried a level, kind of giving the game a cool hypnotic flow, especially in levels that you’re having a hard time beating.

Another new facet to the game are the bonus levels. Throughout each level, there are several gold icons floating around. Obtaining them is optional as they only give you more points, but if you manage to collect them all and clear the level, you will be given the opportunity to play an 8-bit level also filled with floating gold icons that is there just to boost your score. These bonus levels add a tremendous of replayability to the game not seen in previous iterations, as attaining a perfect score in not only each level, but each bonus level as well, will take a considerable amount of time. 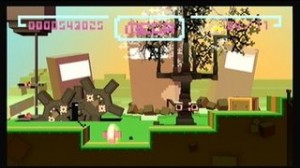 What separates Runner from other similar titles like The Impossible Game is the essence of the Bit.Trip series- everything in the game is connected to music. With a bare-bones electronica beat set as a backdrop, every time you dodge something or grab a piece of gold or pink cross, an on-beat note is played. With several quick evasions, a basic, very rhythmic melody is crafted. In addition, very pink cross icon you run into not only increases the score multiplier, but further expands the beat, just like in previous games. This effect is compounded in Runner- as the beat swells, tension rises as you focus more and more on not dying, building up a beautiful crescendo until you can finally exhale in elated disbelief after reaching what was once a seemingly impossible goal, or curse loudly as you are sent back to the start of the level for the umpteenth time.

Don’t let the on-rails aspect and simple controls fool you- this game is hard. Bit.Trip Runner not only mimics retro games for their stylings, but the repetition and difficulty as well, as obstacles diversify and move closer and closer to one another as Runner progresses. It got frustrating at times repeating the bulk of a level over and over just because of one difficult maneuver towards the end of a level, so beware gamers of low perseverance. The music of the game can also be a detriment to success- it’s very easy to get lost in the rhythm and lose focus, and since the musical cues that build the melody are on-beat, I often pressed the jump button on-beat as mind drifted towards staying on time audibly rather than relying on my eyes to guide me to the end of the level, causing a bit of frustration. While the bulk of Runner is a solid challenge that appealed to my Mega Man nostalgia, it gets DoDonPachi hard (maybe not THAT hard, but pretty got dang hard) towards the end, around level 3-9. I probably spent at least 100 tries on each of the final four levels before I beat them, though my vexation was greatly mitigated because of the aforementioned auto-restart feature.

Bit.Trip Runner is an amazing game, and is a great example of how depth can be found in simplicity. While it doesn’t have the authentic old-school feel that arcade graphics brought and isn’t as innovative gameplay-wise as Beat and Core were, Runner gives the series a breath of fresh air by combining an accessible graphical style and fun, addictive gameplay that can attract newcomers to the series with a high amount of replayability and difficulty towards the end to keep hardcore gamers satisfied. A highly-recommended pick.