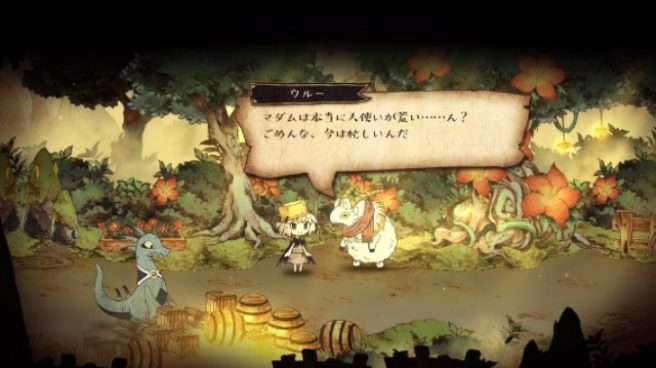 This week’s issue of Famitsu reveals The Wicked King and the Noble Hero from Disgaea developer Nippon Ichi Software, and it’s being led by The Liar Princess and the Blind Prince creator Sayaka Oda. A release is planned for June 24 in Japan.

“I’m going to become a noble hero just like papa!”

The human girl Yuu is the daughter of the late hero. Raised by the king dragon, she is told about her father’s adventures every night… Inspired by the story of the hero who defeated the overlord, she sets off on an adventure to become a noble hero.

But Yuu is still unaware… that the overlord that her father once battled was the king dragon himself.

Many of the elements that appear on-screen, from the characters in the story to backgrounds, have been hand-drawn by the designers. Enjoy detailed graphics such as the depths of the forest and feeling of soft light throughout the entire story. Many unique characters will also appear. You will surely meet someone you like.

The setting of this adventure is a somewhat mysterious world inhabited by monsters. Go on an an adventure where the plants and trees sway, and small animals bustle about. With a story told through read-aloud narration, pleasant music, and a fairytale-like setting, you will feel as if you have really stepped into a picture book.

And a few screenshots: