Not Tonight 2 announced, coming to Switch 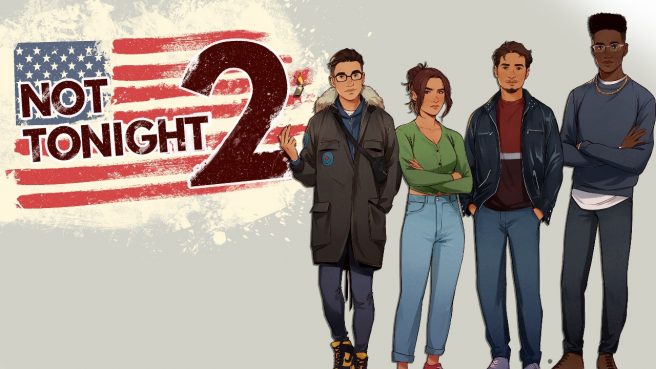 No More Robots and PanicBarn have announced Not Tonight 2, a sequel to the original game that released on Switch at the start of 2020. The follow-up has also been confirmed for Nintendo’s console, though there’s no word on launch timing currently.

Immigration Enforcement Case #112: You are under arrest. Unless your friends can cross a broken America, retrieve your identifying documents and stay out of trouble… this is the end of the American dream for you.

In an alternative broken America, where capitalism and political greed have taken center stage, your friend has gone missing. Snatched during a protest, Eduardo Suarez has been seized by the authorities, and now sits ready for processing in the Miami gulag.

Not Tonight 2 is an American document-checking road trip, fusing a time-pressure RPG with a politically charged, dark comedy where every decision matters. Will Eduardo’s friends Malik, Kevin and Mari manage to locate and deliver his documents to Miami in time, or is this the end of the American dream?

The original Not Tonight is said to have sold around 100,000 copies on Switch.