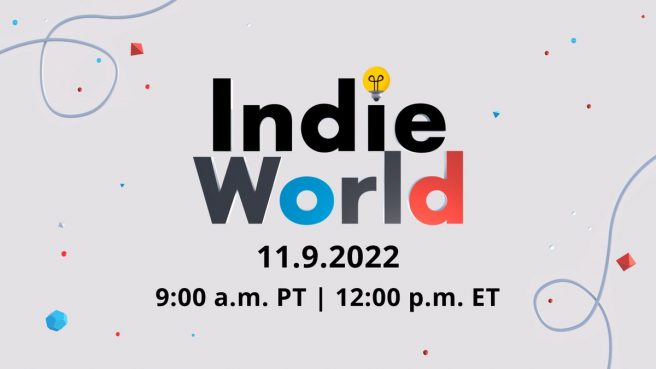 Lots of games were shown off in the November 2022 Indie World Showcase, and we now have a recap from Nintendo covering all of the announcements and news. Over 20 titles were showcased for this year and beyond.

Today, Nintendo released a new Indie World showcase, revealing a diverse lineup of more than 20 upcoming indie games headed to the Nintendo Switch system in 2022 and beyond. The presentation included the announcement that the much-anticipated sports RPG Sports Story will touchdown on Nintendo Switch this December. It also revealed the news that Rogue Legacy 2, the acclaimed sequel to the beloved genealogical roguelite, will bequeath its legacy onto Nintendo Switch later today! Other games featured included the beautifully handcrafted adventure Aka, in which players take on the role of a retired warrior aiming to find inner peace on an isolated island paradise, launching for Nintendo Switch on Dec. 15; the wholesome puzzler A Little to the Left, which launches later today, and challenges players to sort, stack and organize household objects into just the right spot – despite the disruptive influence of a mischievous cat; and Venba, a narrative cooking game, where food, music and family all come together to create a delicate symphony on Nintendo Switch in spring 2023. “We’re so impressed by the passion and talent on display from indie developers who create these inspiring and diverse experiences for Nintendo Switch,” said Steve Singer, Nintendo of America’s Senior Vice President of Publisher and Developer Relations. “Their contributions help the Nintendo Switch family of systems deliver on its promise of being the home for games that everyone can enjoy.” To view the Indie World Showcase in its entirety, visit https://www.nintendo.com/indie-world/. The video showed off new details and footage for an appealing assortment of games, including:

This Indie World presentation also included a montage of even more indie games on the horizon for Nintendo Switch, including the critically-acclaimed Inscryption, which blends the deckbuilding and roguelike genres with escape-room-style puzzles and psychological horror all into an inky black odyssey, launching on Dec. 1; Wobbledogs Console Edition, a casual 3D pet-simulation sandbox, in which players care for their own personal collection of wobbly, mutating dogs – launching on Nov. 17, with pre-orders available later today in Nintendo eShop and the My Nintendo Store on Nintendo.com; WrestleQuest, the ultimate pro wrestling adventure in which RPG and pro wrestling combine for the very first time, launching in May 2023; Storyteller, an award-winning reactive puzzler in which players must use their wits to retell iconic tales, releasing on March 23, 2023 as a console-launch exclusive; Curse of the Sea Rats, an epic hand-animated, story-rich action adventure featuring swashbuckling pirate rats, launching in early 2023; and, last but not least, WORLD OF HORROR, a 1-bit roguelite horror RPG that pits players against eldritch mysteries and malevolent legends of Japanese folklore, creeping up in summer 2023.