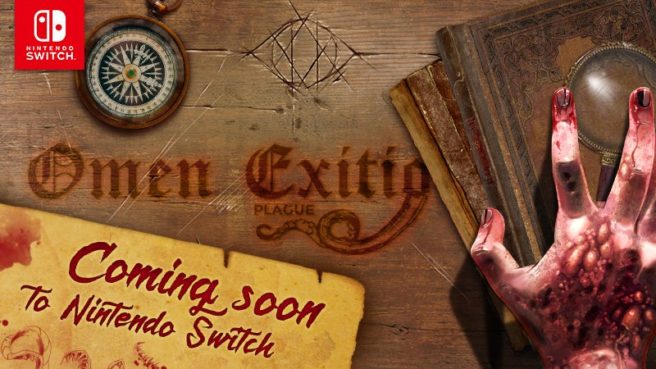 Omen Exitio: Plague is coming to Switch, Forever Entertainment has announced. Other than “soon”, a release window hasn’t been confirmed.

We have the following overview and trailer for Omen Exitio: Plague:

Omen Exitio: Plague is inspired by the gamebooks of the ’80s and ’90s, mixing the alien and horrifying universe created by H.P. Lovecraft with an original plot and characters, all guided by your choices, which will lead the protagonist of the story through the labyrinthine mystery represented by a terrible disease and the shadows that lie behind it.

Zanzibar, 1896. Dr. Jake Huntington enlisted in the army to forget the loss of his wife. Yet something sinister and ancient is about to overturn his life forever. Shadows that inhabit the confines of reality seem to converge all in one point: a terrifying disease that threatens to exterminate the entire human race.

However, the disease is just one of the pieces that make up a vast mosaic, and discovering its design may not be that easy. Intrigues, machinations and subterfuges hide the truth, tearing it away from the doctor’s understanding.

To connect all the dots, Jake will have to cross a threshold beyond which many before him have lost the way of reason.

Are you willing to open this door?

Features
All new adventure set in H.P. Lovecraft’s otherworldly universe
Encounter famous historical figures based on real events
Your choices and chosen skills affect the way the story unfolds
Hundreds of hand-drawn visuals to set the scene
Hauntingly beautiful soundtrack and sound design
Unlike most choose your own adventure (CYOA) titles, you can not meet an early demise
One playthough takes 4 to 6 hours but it will take many more hours to experience everything